2PM
had debuted in September last year with “10 out of 10” and continued to
release hits after hits including “Only You,” “Again and Again,” and “Hate
You,” making themselves known as Korea’s top performance boy band. This
year, the boys have released their first album, 1:59, where listeners
can see how much they matured. The title track is “Heartbeat” which does
not have an exact genre but shows 2PM’s style. One can hear the sounds
of a person’s heart palpitation along with drums and a full orchestra,
which all flow together to make a dynamic feel. 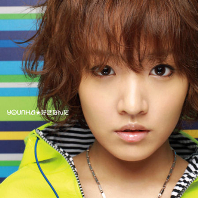 In
celebration of her five years in the Japanese music industry, Younha
releases her 10th single album in Japan and Korea. In Korea, the
single will be available both on and offline. Younha has taken part in
writing the lyrics to I Like You which shows the honesty of how a 21
year old girl feels about innocent love. It has a clean melody line
which flow well with Younha’s vocals. The guitar sounds also make
listeners’ hearts brighter. Also included in the song is a couple song,
Sunday which is of the modern rock genre. It has bright sounds as well
with a mischievous boy feel to it.

Mini
album, Alone shows the ten year journey KCM had musically. In order to
thank his fans for coming along this long period of time with him as
well as fellow singers who gave him songs and helped him along the way,
KCM produced, composed and penned the lyrics to all the songs in this
album minus the title track. The title track is “One Day” which unlike
his usual medium tempo numbers, is a ballad composed by Lee Hyun Seung
who wrote many hit songs such as Kim Tae Woo’s “Love Rain” and Davichi’s
“8282.”

Big
Bang’s Taeyang makes a solo comeback after a year and five months.
Earlier Taeyang had released his first digital single, Where U At and
he just released his second single, “Wedding Dress.” The song is an
R&B number which was co-composed by Teddy who also wrote 2NE1’s
Lollipop and I Don’t Care and Taeyang. Taeyang will do his first
performance for “Wedding Dress” on the 15th of this month on InkiGayo.

Kim
Tae Woo releases a new single, “To Dream a Wish” for the drama series,
Iris. Other top artists such as Baek Ji Young and Big Bang have
contributed for this drama. “To Dream a Wish” is the main theme number
for Lee Byung Hyun; the song depicts his lonely character. Kim Tae
Woo’s vocals showcase this mood well.

MC
Mong and Maybee sends their love story through Unvincible Lee Pyung
Gang soundtrack part two. The two had previously collaborated on the
song, “Song Written to You Part 2.” The two have come back for “Man Like
Me” which has lively rhythms. MC Mong’s rap and Maybee’s clear vocals
flow well. Also included in the album are five additional songs.