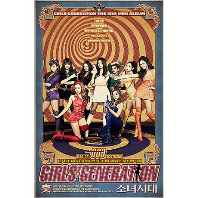 Asia’s number one girl group, SNSD makes a surprise comeback with a new mini album, “Hoot.” The girls have been quite busy this year promoting their second album with songs, “Oh” and “Run Devil Run” and debuting in Japan. The title track of the new album is “Hoot,” which showcases their upgraded vocals and emotions. SNSD will make its comeback on October 29th via Music Bank.

02 To You Who’s Not Picking Up the Phone

2AM who debuted about two and a half years ago finally releases its first full-length album titled, “Saint O’Clock.” Bang Shi Hyuk who produced 2AM’s hit number “Can’t Send You Even If I Die” has also produced this album, elevating fans’ anticipation. The first title track is “Like Being Crazy,” a charming ballad number that showcases each of the members’ vocals. Another title track “To You Who’s Not Picking Up the Phone” which centralizes around the theme of the loneliness and hurt felt through breakup. There are a total of eleven new tracks, six which are available on the homepage before the album release date for preview listening.

Female hip-hop duo Miss $ returns this month with a repacked album titled, “Pro. Miss U” with a follow up promotional track titled, “Promise U.” Originally sung by Vibe, the rappers bring their own flavor to the song. With the help of producer Trendy Boy, the song has been re-arranged with electro-hip-hop sounds.

FT Island is the fourth guest to take part in composer Lee Kyung Sup’s 20th Anniversary Project Album, “Twentyth Urban.” The song was originally sung by Kim Jung Min in 1995 and was included in his second album, “4LOVE.” It was the song that brought the artist to fame overnight. FT Island remakes this song bringing in some rock flavor to it.

Lee Sora – My One And Only Love (released)

Jami Soul – Everybody Loves Me (released)