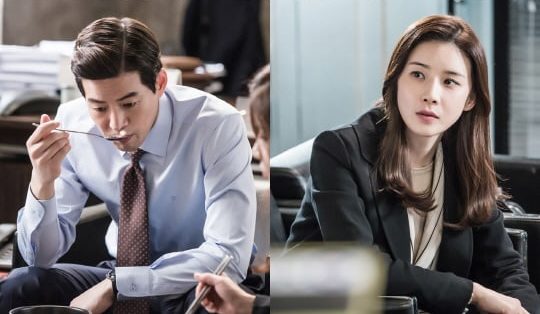 The stills show the two leads sharing a meal together for the first time.  The meal is a simple Korean meal with modest side dishes, and it looks as though Lee Sang Yoon’s character has given Lee Bo Young’s character some of his food to share. At first glance, the scene depicts a normal, everyday activity, but the meaning behind it is so much more significant. It shows the new level of closeness between the two characters as they see everything crumble around them. The location of the meal is also noteworthy, as they are inside the law firm, the very place where they cannot trust anyone and only have each other to rely upon.

The producer behind “Whisper” is known for making meaningful scenes where characters share a meal in his previous works such as “Punch” and “Empire of Gold.” It is interesting to see what hidden meaning lies beneath yet another meal scene, and how the two leads will join forces for a counterattack.