The following is an account from Alexag7, a member of the SM TOWN IN PERU team:

At this event we also signed petitions that will be sent to SM Entertainment’s office in Korea.

We had people in charge of the live broadcasting via twitter (Nathy from SHINee Peru and Pamis from TVXQ Peru), recording (Sonia from Kasoo Store), and a professional photographer in charge of taking the best pictures (Pedro Ricardo).

Our staff was ready to do their best.

3:20pm: The show begins. The MC’s were Rosa y Rossana from SHINee Peru.

We began with the CULTURAL HOUR, in which we had members of the Agency of International Cooperation of Korea (KOICA) display traditional Korean clothing, the Hanbok, and also talk about Korean traditions.

After that, there was a presentation by the Peruvian Federation of Taekwondo, who taught us about this art.

Finally, members of International Youth Foundation (IYF) had a special number followed by some words by Mr. Victor Vela, a representative of IYF. They finished with a traditional Korean dance.

The Schedule continued, always expressing our gratitude to the people and institutions that supported us.

4:00pm: SM TOWN IN PERU HOUR began. We started off with the introduction of the leaders of the SM fans clubs in Peru, who thanked the audience for their support..

We prepared special presentations of dance groups who performed the following songs:

All the people sang along as well as the fanchants.

Then, our main project was to dance to SM’s Let’s Go on a Trip, so all the members of the dance groups simulated the real artists and made the audience dance along.

After this, we took our time to show a special demonstration of our gratitude to the two Korean institutions who gave us all their support, KBS World Radio and Seoul International Drama Awards.

Finally, SM TOWN HOUR closed with the presentation of the song Star Star Star by SNSD.

Before the event ended, we had the free drawings for OST’s, DVD’s and books donated by KBS World Radio and Seoul International Drama Awards, as well as some products donated by the Korean Embassy in Peru.

The event finished with the participation of almost FOUR THOUSAND PEOPLE (4000), a number that was confirmed by the members of the City Hall and the members of our staff who were at the entrance at all times.

All the people were more than happy, the proof being the hundreds of positive comments left on our Facebook, Blog and twitter accounts. 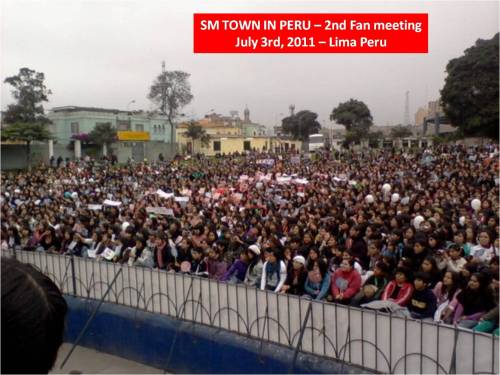 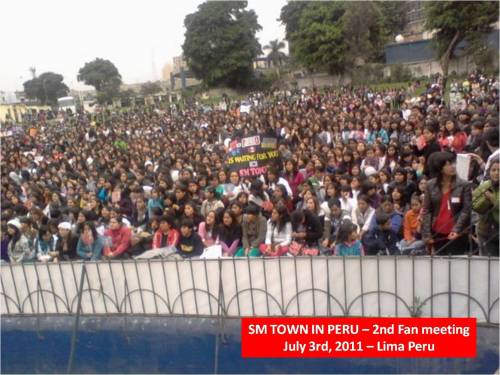 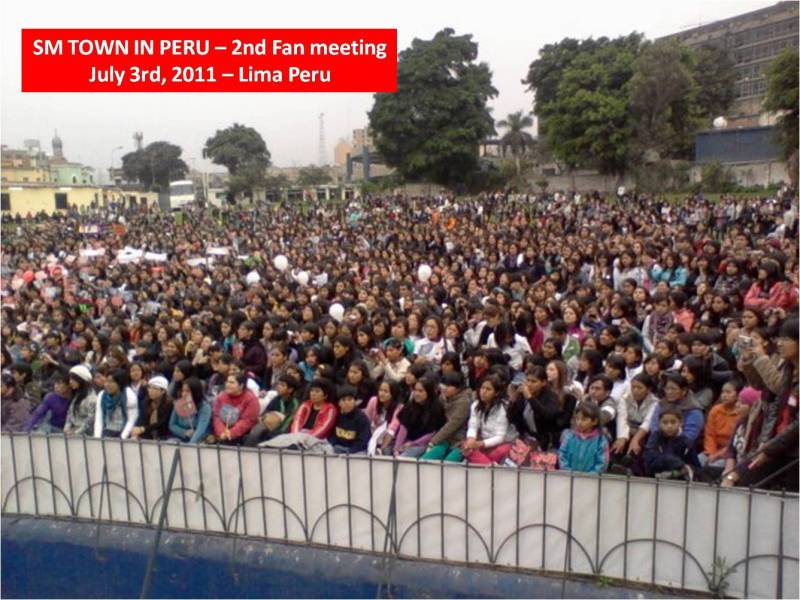 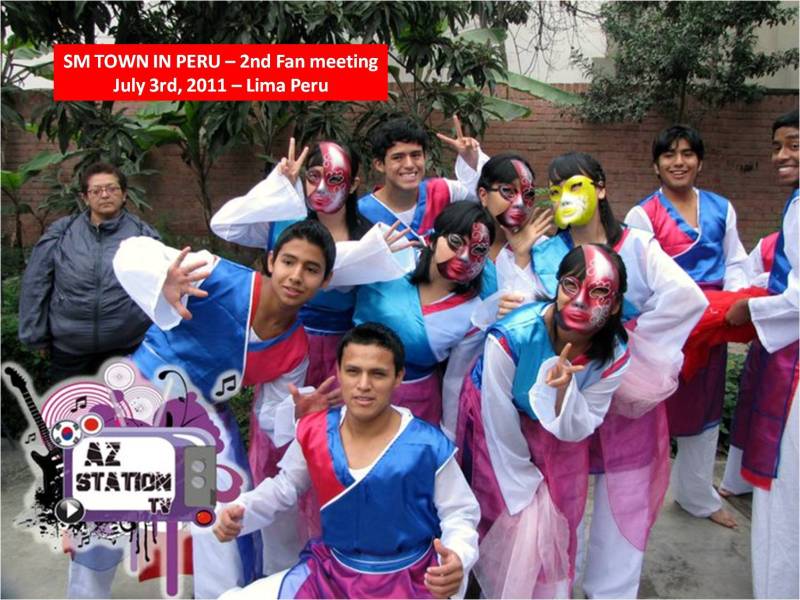 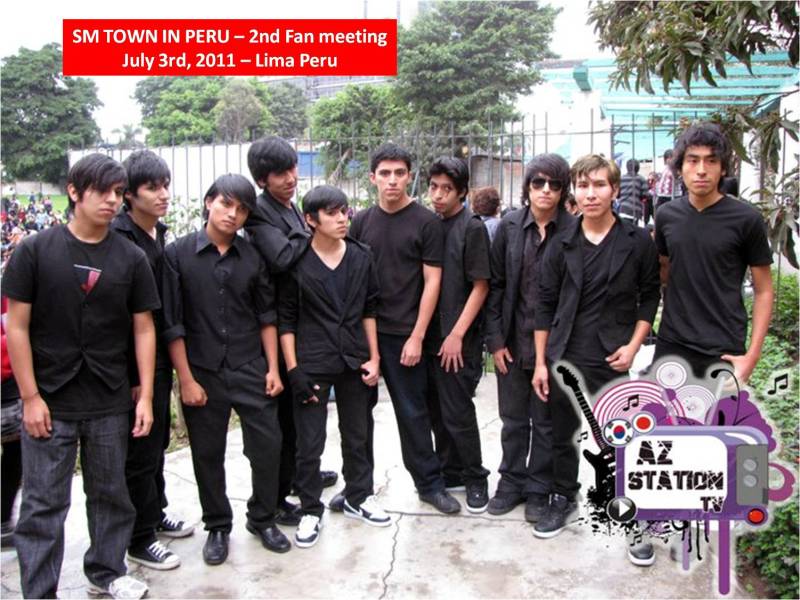 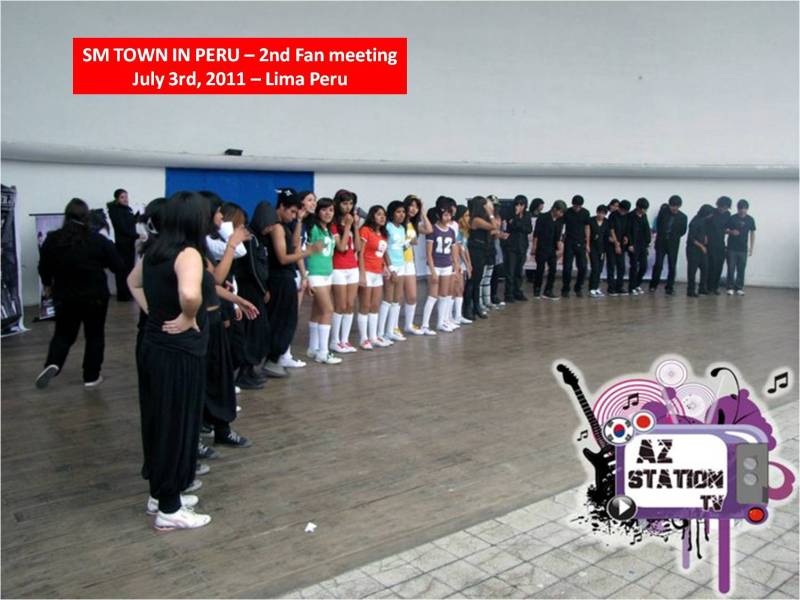 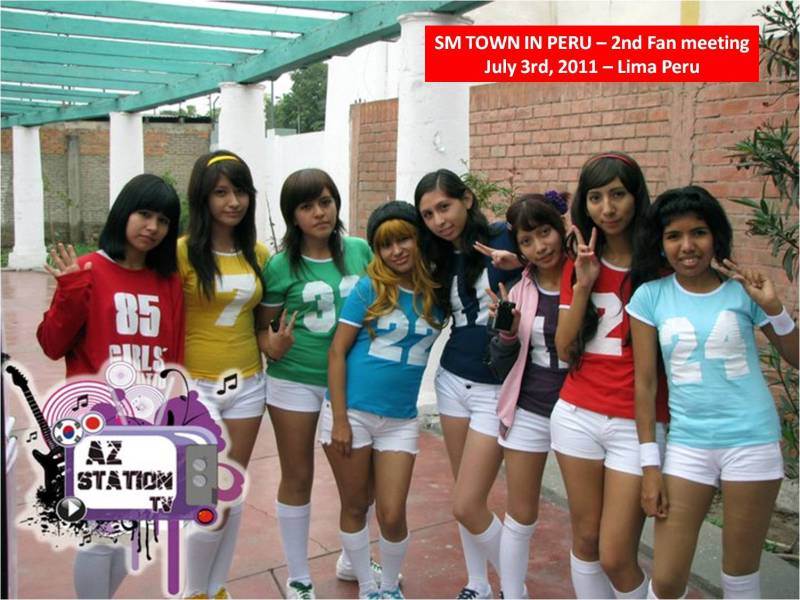 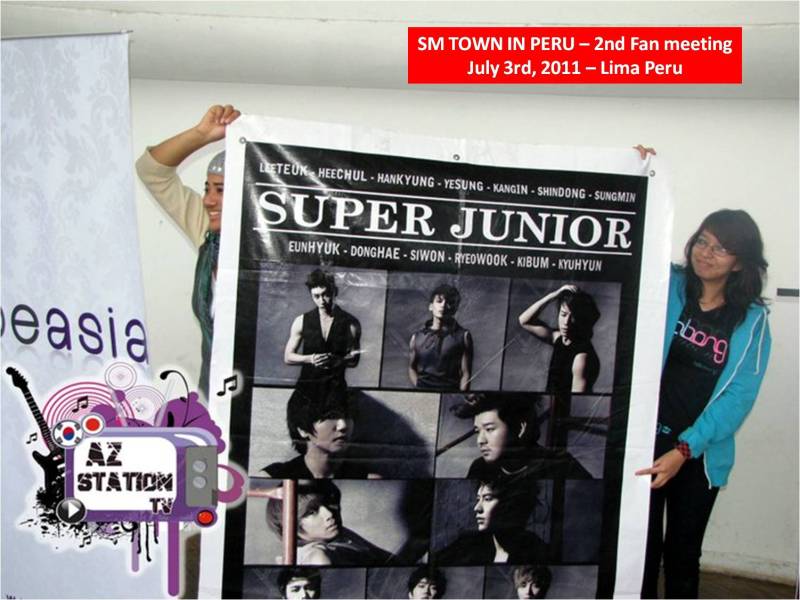 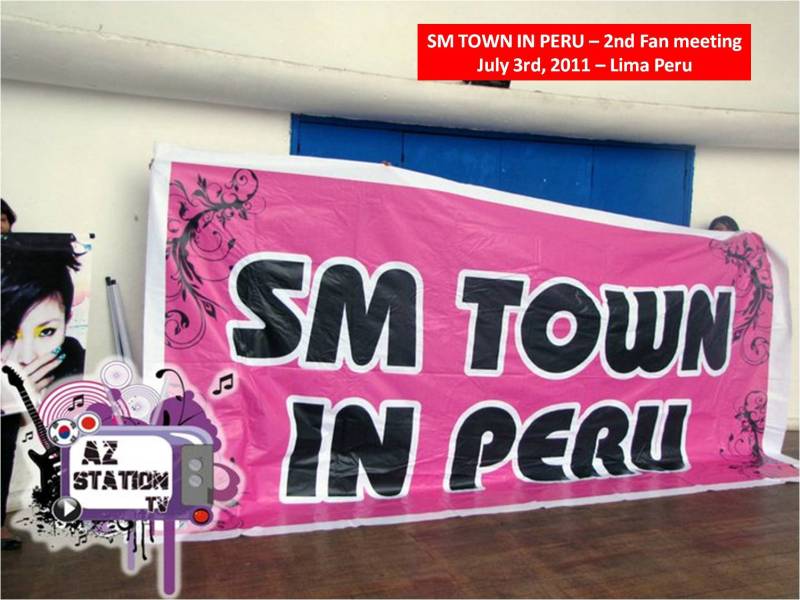 The following list expresses our sincere gratitude to all the people who supported the SM TOWN in PERU event:

Korean Embassy in Peru, thank you very much to the Secretary of the General Consul for her attendance and to the Consul himself LEE Hwang-roh who made an especial donation of posters, fans and folders of Jang Geuk Suk in behalf of the Embassy.

Agency of International Cooperation of Korea (KOICA) for their attendance and for the especial exposition of the Korean culture.

International Youth Foundation (IYF) for their collaboration and beautiful dances.

Peruvian Federation of Taekwondo for their participation; to his president Mr. Young Gi Jeon, for his support.

Center of Korean Language, to Shepherd Bang and his wife director Ines for helping us to contact the Peruvian Federation of Taekwondo.

Be Asia for its support and for helping us to do the Cultural Hour for the SM TOWN in PERU event. To Grecia and all her team thank you very much!

Kasoo Store, to Mr. Aldo Peralta and Mrs. Sonia Tovar for their UNCONDITIONAL SUPPORT, their donations and for their hard work in the coordination of the SM TOWN in PERU, 2nd fan meeting. We have no words to express our gratitude!

The Corner of KPOP, to Syrup Lee, General Coordinator of the SM TOWN in PERU Project in Korea, for her constant work and permanent contact with us, the coordinators of the Project in Peru. Thank you very much for getting in contact with Seoul Drama Awards and KBS WORLD Radio. THANKS A LOT!

Seoul Drama Awards for its wonderful support to the SM TOWN in PERU project, for giving us the opportunity to show that Peru has a great admiration to the Korean music and culture. Thank you very much for your donation as well, all the products were given away in a free draw..

KBS WORLD Radio for your kind support and interest shown to the Peruvian K-Pop fandom, and moreover to the SM TOWN in PERU project. Thank you very much for your book donation, which have been also given away in the free drawing.

Dance Groups: Thank you so much for your collaboration!

Jennifer Segura, for sharing with us her beautiful voice in the singing session

Minoz Peru, to Veronica and her members who helped us with the security team. Also, thank you for helping us getting to the local media.

Peruvian K-Pop fandom in general, THANK YOU for attending and supporting SM TOWN in PERU project!

Jessica Guerrero for the preparation of the food for the special guests.

Claudia Rios Karlsson for her donation of the professional photographer.

Donators, THANK YOU VERY MUCH, your donations helped us a lot! We are really grateful!!

Jesús María City Hall, to Mrs. Mary Anco and Mr. Victoriano Chávez, for all their support before and during the event. Also to the rest of the members of the City Hall.

Jesús María Police Station, to all the members who were there to protect us, also thanks to the members of the National Security Department.

The press: thanks very much to all the media: reporters, interviewers, photographers, camera men who attended our event. THANK YOU VERY MUCH!

STAFF members of the SM artist fan clubs of TVXQ PERU (including CHANGMIN ANGELS AND YUNHO HOUSE), SNSD PERU, SHINee PERU, Hato PERU, Fx PERU and BoA PERU including also parents and family members who were present and helped a lot during the event.

People who watched the event live through twitter, thank you very much for stayed tuned!

Finally, thanks to ALL THE PEOPLE WHO ATTENDED SM TOWN in PERU 2nd fan meeting. THOUSANDS OF THANKS, for supporting this project, we know that if we keep working hard, we’re going to achieve our dreams. Our work hasn’t finished yet; we’ll keep doing our best until we see SM ARTISTS and more landing on Peruvian ground!

THANK YOU VERY MUCH FOR THIS DAY: JULY 3RD, 2011, A DAY THAT WILL BE ALIVE IN THE MEMORY OF ALL THE KPOP FANDOM IN PERU!

SM TOWN IN PERU, our goal, our dream!