The world was watching Friday, April 27 as South Korea’s president Moon Jae In and North Korea’s leader Kim Jong Un met for the first time in history in an inter-Korean summit, also marking the first time a North Korean leader has crossed the border in 65 years.

The talks were met with voices of hope and optimism as well as skepticism from around the world, amid speculations as to the kinds of changes the summit could bring.

After engaging in discussions since the morning, president Moon Jae In and Kim Jong Un signed and released a joint statement prepared by the North and South Korean delegates, in which the two leaders agreed to announce the official end of the Korean War this year (which was on an indefinite time-out since the armistice agreement in 1953), as well as denuclearize the Korean peninsula. Read the full joint statement below. 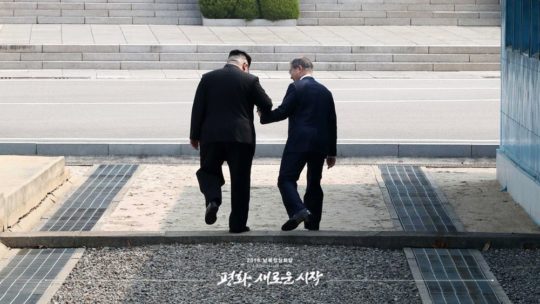 Panmunjom declaration for the peace, prosperity, and reunification of the Korean peninsula.

On April 27, 2018, President Moon Jae In of the Republic of Korea and Chairman Kim Jong Un of the State Affairs Commission of the Democratic People’s Republic of Korea held an inter-Korean summit at the House of Peace at Panmunjom with a desire for peace, prosperity, and reunification of the Korean peninsula during these historical times of change.

Both delegations have made clear to the world and the 80 million Korean people that a new era of peace has begun and that there will be no more war on the Korean peninsula.

Both delegations hereby make the following statement, with a determination to end the long-standing division and competition of [North and South Korea] as well as to move forward into a new era of reconciliation and peace among our peoples and of assertive reformation and development of the relationship between the Koreas.

1. North and South Korea will move forward with self-reunification efforts via complete and innovative reformation and development, for joint prosperity and a reconnection of our peoples’ divided bloodlines.

The reformation and development of the relationship between North and South Korea is the wish of all our people, and is a demand we cannot postpone any longer.

1-1. North and South Korea have confirmed [with each other] the principle that the fate of our peoples is something that we ourselves must decide, and we will push forward with the agreements and declarations made here today.

1-2. North and South Korea will be holding talks and negotiations between high-ranking officials from both sides as well as officials in various fields in order to create plans for practical implementation of the agreements made during the inter-Korean summit.

1-3. North and South Korea will install a joint North-South Korean communications office in the region of Kaesung, in order to facilitate cooperation and non-governmental exchanges.

1-4. In order to build a sense of unity and reconciliation, North and South Korea will work to invigorate channels of cooperation and exchange among all Koreans.

North and South Korea, in order to help build a reconciliatory and cooperative atmosphere, will push for joint events in which all participate, including all levels of government, private organizations, and more, on significant days such as June 15 [the day of the North-South Joint Declaration in 2000]. Internationally, the Koreas will jointly participate in international competitions, including the 2018 Asian Games, in a show of wisdom, talents, and unity.

1-5. North and South Korea will work to resolve the humanitarian issues that were borne from the division of Koreans. We will hold a Red Cross summit to reunite separated families, as well as resolve various other issues.

We will be moving forward with reuniting separated families to commemorate this year’s National Liberation Day of Korea (August 15).

1-6. North and South Korea will move forward with the businesses outlined in the October 4 declaration in the pursuit of economic stability, development, and joint prosperity. Our first step will be taking practical measures toward the connection of and modernization of roads and the Donghae and Gyeongui railroads.

2. North and South Korea will make a joint effort to relieve military tension and to realistically resolve threat of war.

2-1. North and South Korea will be ceasing all hostile operations toward each other across all mediums — land, sea, and air — which have been the source of military tension and conflict.

Beginning May 1, we will cease all hostile activities across the entire Military Demarcation Line, including loudspeaker broadcasts and balloon propaganda. Those methods will be abolished completely, and the DMZ will be turned into an area of peace.

2-2. North and South Korea will develop a plan to turn the Yellow Sea at the Northern Limit Line into safe and peaceful waters, for safe fishing activities and the prevention of accidental military clashes.

2-3. North and South Korea will take necessary military measures for the facilitation and vitalization of joint cooperation, exchange, contact, and communication.

In order for the immediate resolution of any military issues between North and South Korea, meetings will be held often between military officials from both sides. The first general-level meeting will be held in mid-May.

3. North and South Korea will actively cooperate in order to build a permanent and stable system of peace.

Ending the current, unrealistic situation of the cease-fire on the Korean peninsula and building an innovative system of peace is a task that we cannot postpone any longer.

3-1. North and South Korea will review our non-aggression agreement that prohibits using any military force against each other, and will be strictly obeying the agreement.

3-2. Following the abatement of military tension between North and South Korea, we will take steps toward disarmament.

3-4. North and South Korea have confirmed both sides’ intent for the denuclearization of the Korean peninsula.

North and South Korea both recognize that the active measures taken by North Korea are incredibly significant for the denuclearization of the Korean peninsula, and will both carry out their due responsibilities.

North and South Korea have agreed to make every effort to obtain international support and cooperation for the facilitation of denuclearization.

Both delegations will maintain regular meetings and direct lines of communication to discuss matters regarding the people, thereby building trust in each other, and have agreed to work together to increase momentum toward peace, prosperity, reunification, and development of the Korean peninsula.

President Moon Jae In has agreed to visit Pyongyang this fall.