SBS’s new drama “Oh, the Mysterious” has released its character relationship chart after its first week of airing. The chart is to help viewers understand the drama’s plot, as well as the complicated relationships of the characters.

In the chart, Yoon Kyun Sang (playing the role of Kim Jong Sam and Oh Il Seung) and Jung Hye Sung (Jin Jin Young) are connected with red lines and hearts. Their acquaintance goes way back to their childhoods, but the actual story is set twelve years later when Kim Jong Sam appears in front of Jin Jin Young and declares himself to be detective Oh Il Seung. As Kim Jong Sam tries to hide his true identity, Jin Jin Young continues to become suspicious. All eyes are on the two characters to see how their relationship will develop in the future.

The chart shows that Jang Hyun Sung (Kang Chul Gi) and Yoon Kyun Sang have a teacher-student relationship. Kim Jong Sam met detective Kang Chil Gi when he was young and living off stolen goods. Kang Chul Gi took in Kim Jong Sam and taught him to be a spy, but when Kim Jong Sam was sentenced to death, he disappeared.

Yoon Kyun Sang is also connected to Jun Sung Woo (Ddak Ji) as “blood brothers.” Having grown up together, the two men consider themselves brothers although they’re not related by blood.

The characters are largely divided into two groups in the chart with those on the left being part of Hidden Crime Investigation Unit and those on the right part of Yirim Food Company. The Investigation Unit includes Choi Won Young, Kim Hee Won, Jung Hye Sung, Do Ki Suk, and Kang Shin Hyo as detectives with Yoon Kyun Sang expected to join the team shortly. On the other hand, Yirim Food Company is led by Yoon Yoo Sun and supported by Park Sung Geun and Oh Seung Hoon. 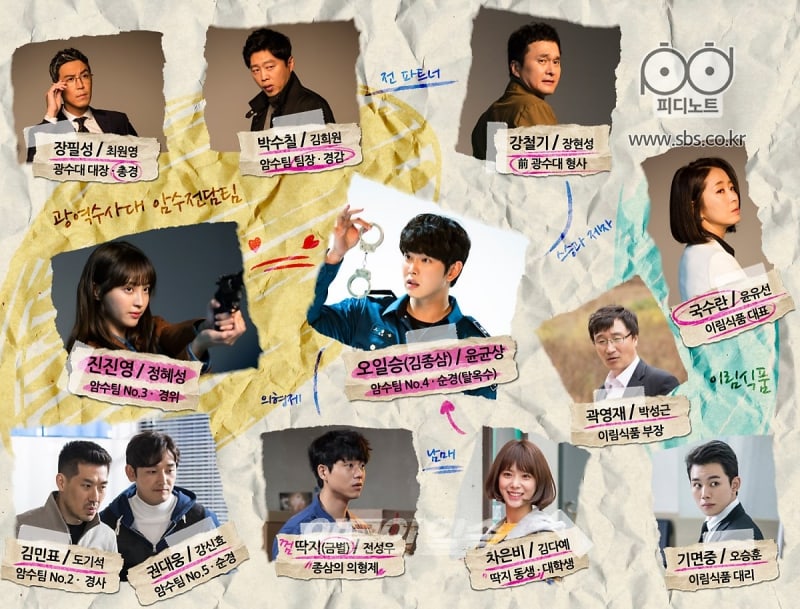 The production staff shared, “The characters in ‘Oh, the Mysterious’ have been developing complicated relationships since Yoon Kyun Sang’s young days. You will be able to further enjoy ‘Oh, the Mysterious’ if you pay attention to how they met each other and what stories they each have.”

“Oh, the Mysterious” tells the story of a death-row convict who breaks out of prison to fight against the corrupt powers as a fake detective. It airs every Monday and Tuesday at 10:00 p.m. KST. Watch the latest episode below!