As announced on their Twitter, Rainbow Bridge World‘s (RBW) ONEUS will hold their first online fan meeting following the conclusion of their recent “No Diggity” comeback schedule.

ONEUS will be broadcasting on February 28 at 5 pm KST through their official V Live channel.

The name of the fan meeting is “Between the Earth and Moon and represents the relationship ONEUS has with their fans.”

In the concept photos, the boys are dressed in school uniforms which shows that they want to “fill the hearts of ToMoon with meaningful times.”

It will be a celebration of memories for their fans who have been with the band since their debut 2 years ago. 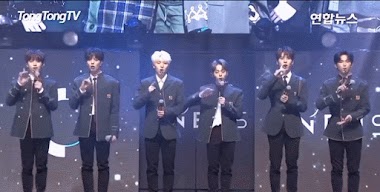 After their successful Ontact Live [CRUSH ON Ø US] in November, fans have high expectations for the broadcast. They can expect a mixture of performances, games and interactions with fans watching live across the world.

After wowing fans with their first full-length album DEVIL, ToMoons cannot wait to see what the “stage genius” ONEUS has in store!