The opinions and views presented in this article do not necessarily represent those of the staff of Soompi.com nor any of its sponsors.

I know that G-Dragon‘s recent episode of posting a photo of awkward implications is not really on the table as a candidate for being called blackface, but I think it brings up a point that should be addressed. Korea is a very open country to foreigners, but the majority of South Koreans are ethnic Koreans. Most of them have not grown up surrounded by people who all look strikingly different in skin and hair type. They know what other races look like, thanks to globalization and the Internet, but it can’t be a reality for them like it would be for someone in a very demographically different situation. As a result, the media of a largely homogeneous population is going to commit an occasional faux pas.

Sebakwi was guilty of airing blackface by copying Michael from Baby Dinosaur Dooly, which in turn was guilty of stereotyping, and Shinhwa has dropped N bombs in their older songs. There is clearly a bigger picture here. At the same time, there’s progress. When something gets caught on netizen (or non-netizen) radar, the offender gets a slap on the wrist and discussion happens. When someone goes in front of the press and issues a public apology for doing something out of line, a message gets sent to the people who are watching: “Maybe you didn’t know before, but now you know this is not OK, this is something that requires an apology.”

As for G-Dragon, I don’t think it’s about what he meant to do, but how people reacted. Maybe he doesn’t know anything about Trayvon. If the company says it’s bad timing, I believe them. Quibbling over the difference between a hoodie and a t-shirt over the head isn’t going to get anybody anywhere. Blaming G-Dragon by claiming that he could not have possibly not known about Trayvon is also stretching it. Still, supposing he did mean to emulate Trayvon: what would be his intentions? If he really knew what he was doing, it’s very possible that he could have meant it as a tribute, not as a parody. At the same time, the road to hell is paved with good intentions, so it’s good that people are noticing these things and saying, “Hold up, what’s going on over here?”

I realize that blacks have been the main talking point so far, but they are by no means the only group that the Korean media has committed offense against. T-ara donning feathered headbands and dancing in a circle of tipis is hardly subtle. 2NE1‘s friend Jeremy Scott has specifically drawn the ire of Native Americans with his fashion sense. Imagine 2NE1’s fans thinking that it’s OK to take concepts from Native American culture without even saying, “This was not done by Native Americans, they were not consulted in the designing of this item,” (which is required by law in the US) because Jeremy Scott got away with it, and 2NE1 likes Jeremy Scott. That would be a great disservice to American culture. 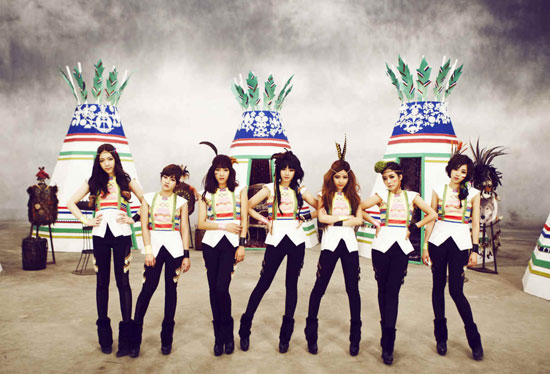 You might think I’m exaggerating, but it is hurtful. We laugh when Alexandra Wallace says, “Ching chong ling long ting tong,” but if people said that when they thought an Asian kid couldn’t hear them, or pushed their eyes up with their fingers to make them pointy, or asked the kid to please open your eyes, that kid would feel hurt, whether it showed or not. It doesn’t matter if the targets of racial insensitivity are an ocean away. If you wouldn’t want someone to do it to you, don’t do it to anybody.