Some of Song Joong Ki’s celebrity friends and members of the “Descendants of the Sun” family thrilled both him and his fans at his fan meeting in Seoul on April 17!

Song Joong Ki was reportedly shocked to see his friend and Blossom Entertainment label mate, and asked Park Bo Gum how he could be there when he had said he was busy. “That was a lie,” replied Park Bo Gum, making everyone laugh. Park Bo Gum also designed the logo for the fan meeting.

Song Joong Ki’s good friend Lee Kwang Soo, who made a cameo in the first episode of “Descendants of the Sun,” also surprised the actor by appearing at his fan meeting with a giant bouquet of flowers. Park Bo Gum later posted a photo on Twitter of the three of them backstage, with the caption “My hyungs are the best” and added some cute hearts.

Gummy, who sang the popular track “You Are My Everything” on the drama’s soundtrack, also performed live for fans at the fan meeting. On April 17, CJeS Entertainment shared a photo of Gummy and Song Joong Ki on Instagram. The caption to the photo reads, “I was so happy that the fans asked for an encore!” 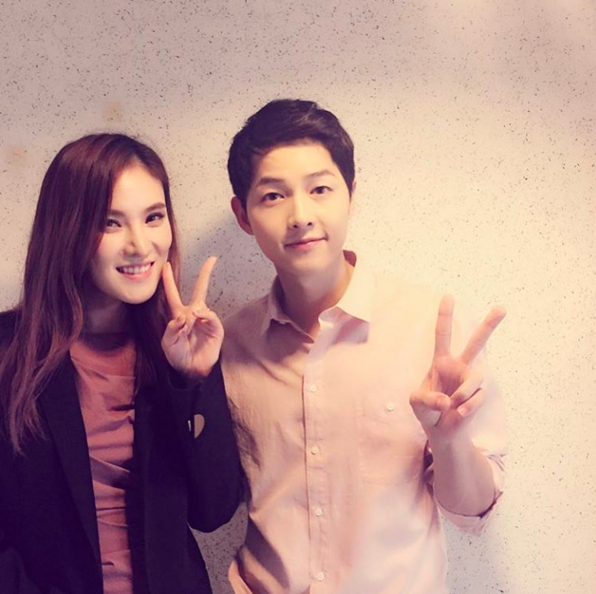 During the fan meeting, Song Joong Ki also thrilled fans by giving them special presents such as putting on lip balm for them, giving them back hugs, taking photos with them, and recording his voice for them to set as their alarm. Finally, he treated them to a cover of Kim Dong Ryul’s “Like a Child” and promised to see them all again soon.

Watch Song Joong Ki (and Lee Kwang Soo’s cameo!) in the first episode of “Descendants of the Sun” below.