It turns out that Park Bo Gum might have a future in bobsledding!

The actor appeared as a special guest on the April 15 episode of “Infinite Challenge,” where he helped lead Yoo Jae Suk’s bobsled team to victory.

As part of the show’s 2018 Winter Olympics special, the cast was split up into two teams and given the challenge to bobsled against one another. Yoo Jae Suk’s team consisted of Yang Se Hyung and Park Bo Gum, while Park Myung Soo was joined by Jung Jun Ha and HaHa.

After a bit of practice, the two teams finally prepared to compete. Yoo Jae Suk’s team, nicknamed the “Good-Looking Losers,” had Yoo Jae Suk as the brakeman, Park Bo Gum as the driver, and Yang Se Hyung riding with them.

The teammates incited a huge reaction from their opposing team as they gained acceleration and finished without any mistakes at 57.87 seconds. 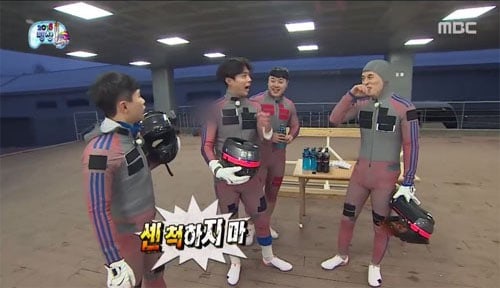 “Once I got into [the bobsled], the tension just disappeared,” Park Bo Gum commented after the run was complete.

The “Ugly Winner Team” then prepared to take their turn. With a slight delay in speed at the start, the team ended up finishing at 58.91 seconds.

By the end of the competition, the Good-Looking Losers team was able to secure their victory with only a 0.2 second time difference.

Want to watch the competition in action? Check out the full episode of “Infinite Challenge” below!