Lee Na Jung said, “Thank you for making today so fun and energetic. The production’s theme is ‘the freedom of youth,’ so I want everyone to freely share their thoughts with each other.”

“Fight My Way” aims to tell a realistic love story among people in the “minor leagues” of life, who may not have brilliant careers in the eyes of the world but persevere in living life the way they want regardless of what people think. 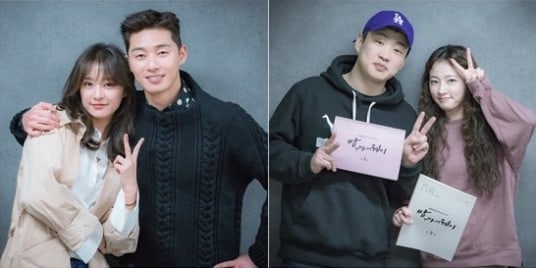 Park Seo Joon plays Go Dong Man, who may be all grown up physically but remains childish in attitude. During the script read-through, he made the cast laugh with his spot-on line delivery. Kim Ji Won plays Choi Ae Ra, who is always ready with a comeback and sometimes has trouble filtering her words. During the read-through, she delivered her lines without hesitation and showed good synchrony with her character. Moreover, the two actors had good chemistry with each other as their characters are longtime friends and remain loyal to each other even as their bickering soon turns into something more.

The script read-through was reported to have a youthful and energetic atmosphere. After one of the actors read the line, “Please applaud,” the other actors began to spontaneously began to clap along. The cast also hummed their own background music where they felt the OSTs should go later in production.

“Fight My Way” is written by Im Sang Choon. It will air in May after the end of “Perfect Wife.”