Park Seo Joon Talks About His New Character And Working With Park Min Young In “What’s Wrong With Secretary Kim?”

The romantic comedy drama follows the story of Lee Young Joon (Park Seo Joon) and his secretary Kim Mi So (Park Min Young). Lee Young Joon is the smart, rich, handsome, and arrogant vice president of a company. Kim Mi So has worked for him for years, so she is perfect for him, but one day, she decides to quit her job.

During an interview, Park Seo Joon said, “I was curious about the character of a narcissistic vice president. I was drawn to his character because his living environment and personality are 180 degrees different from mine. I started to think once more about what I would have done in this situation, and I decided to appear in this drama because I thought I would be able to act in an entertaining way.”

Park Seo Joon compared his new character to his previous characters. He stated, “Lee Young Joon seems more like someone out of a comic book than Ji Sung Joon from ‘She Was Pretty‘ or Go Dong Man from ‘Fight My Way.’ He and I have more differences. When I meet a character who is different from me, it is fun to imagine the character’s way of talking and walking in detail.”

He added, “I think I can portray the self-absorbed narcissist in a somewhat exaggerated way, so I try to act as naturally as possible and express my lines in a witty manner. While filming the drama, I thought about how to show Lee Young Joon’s characteristics through his way of talking, the look in his eyes, and his gestures.” 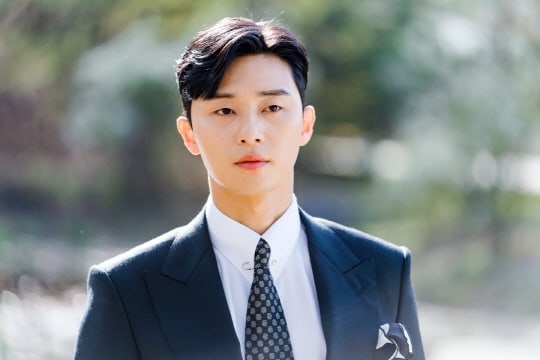 Park Seo Joon also talked about his chemistry with his co-star Park Min-young, saying, “I think more than anything, the chemistry between Park Min Young and me have to be good for many people to like [our drama]. I hope we receive a high score for our chemistry.”

The actor wished, “I hope this drama can be remembered as one that delivers fresh entertainment to the viewers. I, too, want to be an actor who always gives fresh feelings in every production. I’ll do my best to convey as much fun as I can and show you a new look, so I hope you enjoy watching it.