On the latest episode of the tvN drama, Lee Sung Yeon (played by Lee Tae Hwan) discovered that he had not been kidnapped during his childhood, as he had believed, but that it had actually been his brother Lee Young Joon (played by Park Seo Joon) who had been the victim of kidnapping.

Desperate to find out what had really happened, Lee Sung Yeon urged Kim Mi So (played by Park Min Young) to tell him the truth about the incident. However, his prodding caused Kim Mi So to suddenly recover her traumatizing memories of witnessing the kidnapper’s suicide, and she ended up fainting from shock. Lee Young Joon grew furious at his brother, forcefully pushing him aside at the end of the episode as he rushed to Kim Mi So’s side.

In newly released stills from the next episode, Lee Young Joon continues to be visibly upset as he angrily confronts Lee Sung Yeon. The two brothers’ expressions are polar opposites—Lee Young Joon appears uncontrollably enraged as he aggressively grabs his brother by the collar, but Lee Sung Yeon looks imperturbably calm as he stares coldly back at him.

The producers of “What’s Wrong with Secretary Kim” remarked, “Park Seo Joon’s sincere reasons for hiding the truth so carefully and Lee Tae Hwan’s confusion after having discovered this truth will collide violently in this scene. We plan to depict the past [incident] that inevitably scarred both Park Seo Joon and Lee Tae Hwan [in the upcoming episode].” 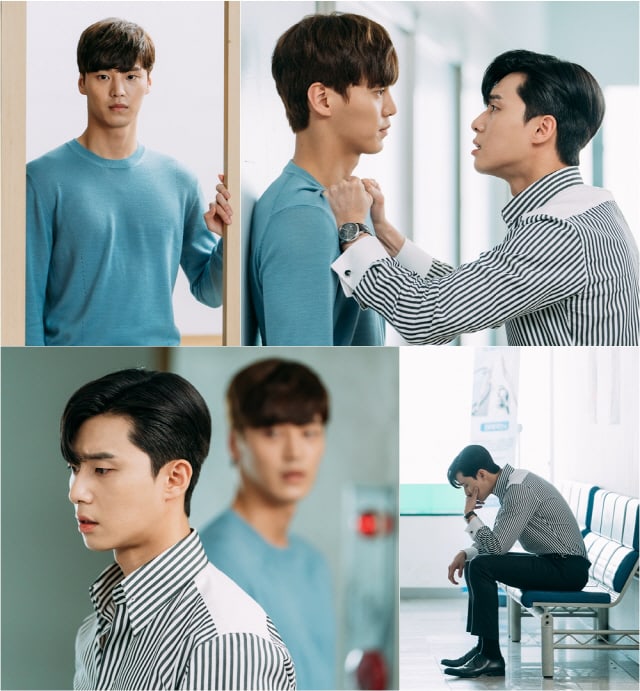 To find out what unfolds between the two brothers, catch the next episode of “What’s Wrong with Secretary Kim” on July 11 at 9:30 p.m. KST.