MBC’s “Section TV” visited Park Shin Hye on the set of a photo shoot for the April 24 broadcast of the show, where she talked a little bit about her recent graduation.

Reporter Park Seul Gi asks about graduation traditions like throwing flour and throwing graduation hats, to which Park Shin Hye says, “I wasn’t able to throw my graduation hat. And graduating with [Girls’ Generation’s Sooyoung and Yuri], there were a lot of fans that came. We thought we wouldn’t be able to take photos outside, so we squeezed together for a shot during the ceremony.” 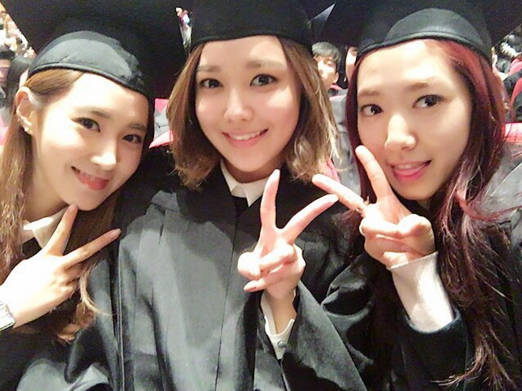 Fiestar’s Cao Lu previously praised Park Shin Hye on “Radio Star” for her impressive work ethic, never being late to class, and always doing well on exams. Park Shin Hye explains, “That’s because Cao Lu saw me in the beginning of school. Once I became a sophomore and junior, slowing down a little bit became inevitable.

Park Shin Hye says that going to school was a way for her to fill the void whenever she finished a drama. “I’d go back to school, take off a semester to do a drama, and repeat.”

When asked how she manages to bring out the charms of her costars, she says, “They’re so charismatic already. All of the people I’ve worked with have great personalities. I’m a similar age to Jang Geun Suk, so working with him was really fun, and I had met Lee Min Ho during an ad shoot prior to the drama, so we were familiar with each other. It was the same with Kim Woo Bin and Lee Jong Suk, where we had met each other in passing on other sets.”

NCT Dream’s Jeno Is A Total Carbon Copy Of Sanrio’s Cinnamoroll – Here Are 10 Receipts, Your Honor