The producing director (PD) of MBC’s new variety show “Unexpected Q” opened up about the pressure of filling the time slot previously occupied by “Infinite Challenge.”

“Unexpected Q” is a new quiz show hosted by Jun Hyun Moo and Lee Soo Geun that will feature celebrities working together to solve a variety of creative and unusual problems submitted by viewers. The program will be taking over the time slot left empty by the immensely popular variety show “Infinite Challenge,” which recently ended its first season after a 13-year run.

Ahead of the show’s premiere on May 5, “Unexpected Q” PD Choi Haeng Ho acknowledged that “Infinite Challenge” was a hard act to follow. He shared that although many people had expressed their concerns about the pressure he faced, he was doing his best to take it in stride. He commented, “I don’t mind hearing people talk about the burden of [following] ‘Infinite Challenge.’ The program ‘Infinite Challenge’ is like an empire that was built up over the course of 13 years. I don’t feel as though it’s a struggle to bear that weight.”

He went on to humbly remark, “As I [expressed when I] repeatedly dissed myself at our press conference, I plan to accept any criticism about the shortcomings of our production or our production staff, and we will immediately take it into consideration and use it to improve [the show].” 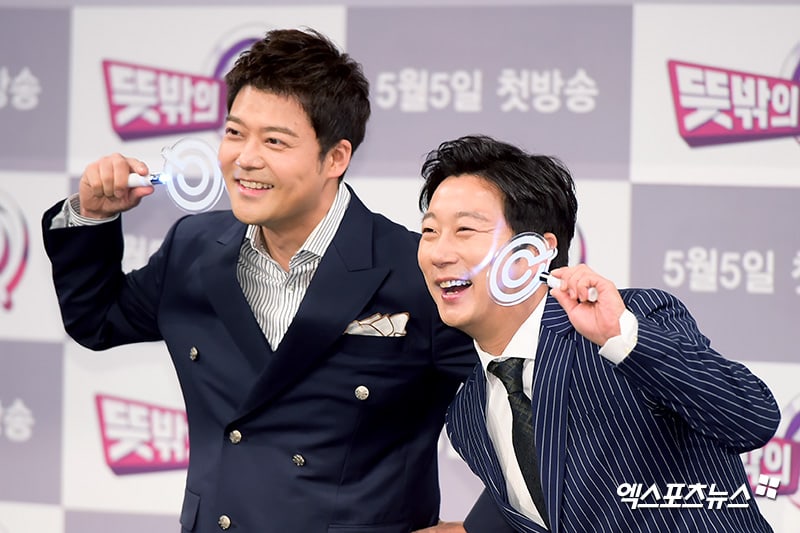 Choi Haeng Ho also talked about what set “Unexpected Q” apart from other currently airing variety shows. “Most large-scale weekend variety programs are filmed outside,” he said, “and they feature top entertainers. We wanted to create a program where the viewers become the stars of the show.”

He continued, “I mentioned at the press conference that we didn’t have much time to create the program, but I think that’s just an excuse. Although that’s something I can share with my colleagues in the industry, it’s not something that I can tell the viewers. After all, [the viewers] assess the program simply by watching it.”