JTBC’s “Pretty Noona Who Buys Me Food” has released a tantalizing sneak peek at its upcoming episode!

On May 5, the drama unveiled a swoon-inducing still of Seo Joon Hee (played by Jung Hae In) and Yoon Jin Ah (played by Son Ye Jin) sharing a romantic kiss together in the rain. The couple passionately clings to one another under a green umbrella, evoking the iconic scene from earlier in the drama in which the two leads shared a heart-fluttering moment under a similar red umbrella. 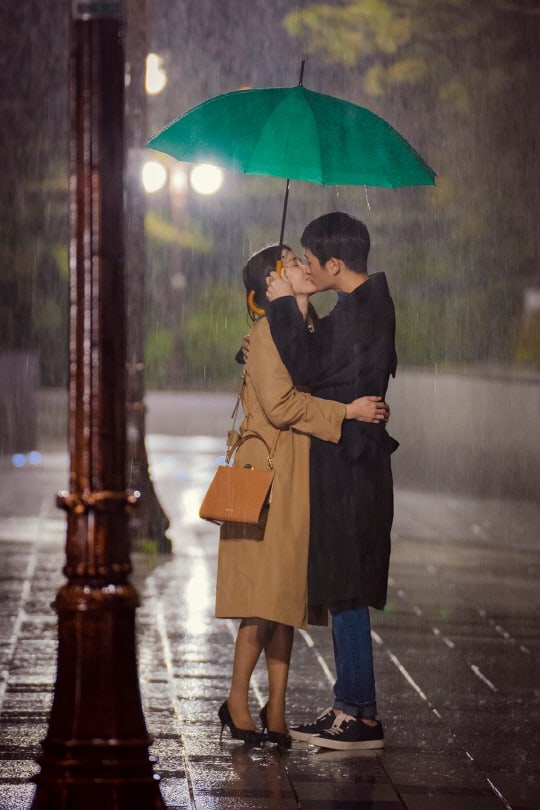 During the last episode of the drama, Yoon Jin Ah and Seo Joon Hee managed to keep their love going strong even after hearing the harsh words of Yoon Jin Ah’s disapproving mother. However, their romance ended up facing yet another obstacle when Yoon Jin Ah was forced to go on a blind date at the stubborn insistence of her mother.

Yoon Jin Ah happened to run into Seo Kyung Sun, her friend and Seo Joon Hee’s sister, outside the meeting spot for her date. Although Yoon Jin Ah only went on the date to appease her upset mother, Seo Kyung Sun naturally misunderstood her intentions and felt betrayed by her friend. Furious that Yoon Jin Ah would go on a blind date behind her brother’s back, Seo Kyung Sun insisted that the two lovers call it quits.

However, the new photo of Seo Joon Hee and Yoon Jin Ah enjoying a passionate kiss in the rain seems to indicate that the couple’s love might just be strong enough to endure the rocky road that lies ahead.