Before the official airing of “Produce 101 Season 2,” each contestant on the show had to write a letter introducing himself. Lai Guan Lin, a trainee under Cube Entertainment, wrote, “Dear national producers, I’m not very good at Korean yet, but I can say this. You will be able to see us soon so please wait a little longer. I love you. Sincerely, Lai Guan Lin from China’s Taiwan.” 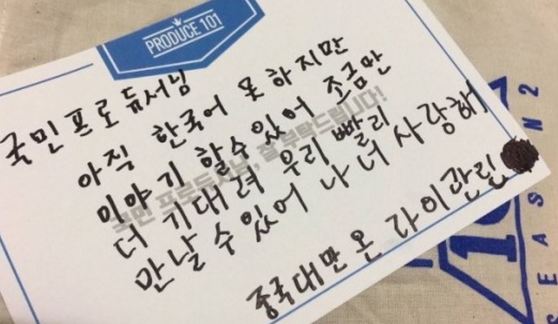 According to Taiwanese newspaper Apple Daily, Lai Guan Lin’s letter has been met with some harsh criticism from citizens supporting Taiwan’s independence from China. Taiwanese netizens have been expressing their anger on various community sites, posting messages like, “I don’t get why he wrote like this,” “Let’s get him kicked out of the show,” and “What a disgrace to our country.”

Chinese netizens, on the other hand, have been showing love for Lai Guan Lin with words of encouragement like “We are supporting you” and “You are doing well.”

Meanwhile, people have been drawing comparisons between Lai Guan Lin’s current situation and Tzuyu’s controversy early last year when she held up a Taiwanese flag on “My Little Television.”

What are your thoughts on the controversy?