Mnet’s “Produce 101 Season 2” takes No. 1 spot in the Content Power Index (CPI) rankings for two weeks in a row.

The Content Power Index ranks television programs based on their overall influence and popularity, factoring in a variety of measurements like search engine rankings and number of articles published on the show. 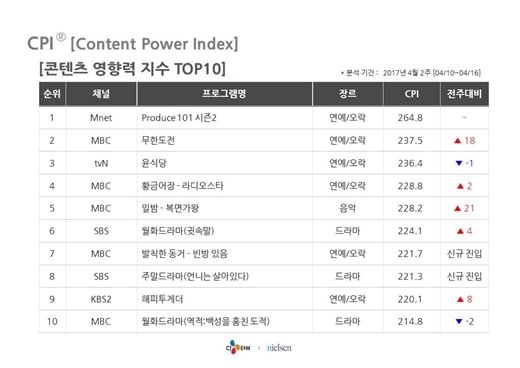 According to the report released by CJ E&M and Nielsen Korea on April 24, “Produce 101 Season 2” took the first place spot for the second week of April, beating MBC’s “Infinite Challenge,” which came in second place, and tvN’s “Youn’s Kitchen,” which came in third.