Rain went on a three-day trip to Taiwan on the December 5 broadcast of JTBC’s “Carefree Travelers,” during which he opened up about his wedding.

“Carefree Travelers” is a variety travel show where celebrities go on packaged tours with the cast members. On the show, Rain was asked about his small wedding to Kim Tae Hee and whose idea it was. The couple got married on January 19 after about five years of dating. They are now parents to their first-born daughter, who was born on October 25.

Rain responded, “My wife was the first to say she wanted a small wedding at the Catholic church without empty formalities and vanities. I wore a tuxedo that I already owned and [we] didn’t do a wedding photo shoot. We didn’t hire a photographer either. The guests acted as the photographers and we put those photos together and made a video.” 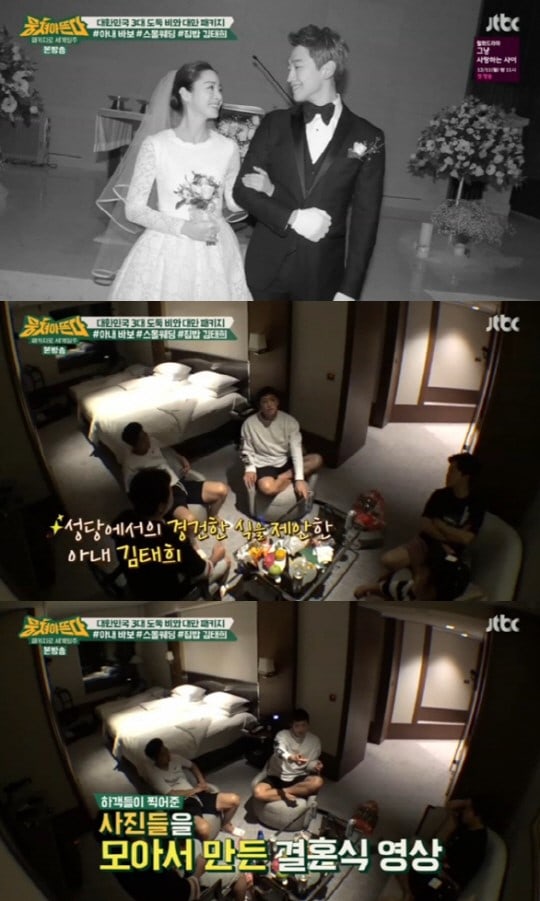 He continued, “Honestly, I have a lot of regrets [about the wedding]. There were lots of things I wanted to do for my wife on that day. I even opened an installment savings account for the wedding. The actual total cost of the wedding came out to a little over 2 million won [approximately $1,840].”

Meanwhile, Rain recently made his comeback with the title track “Gang,” which he showcased during a 90-minute comeback show. He also currently acts as a mentor on KBS’s idol rebooting program “The Unit.”