On the latest episode of JTBC’s “Ask Us Anything,” Rain shared his thoughts on speaking publicly about his wife Kim Tae Hee.

During the February 16 broadcast of the variety show, Rain and Lee Beom Soo appeared as guests to promote their film “Uhm Bok Dong.” At one point, the cast jokingly urged Rain to talk about his wife on the show.

Pretending to be angry, Kang Ho Dong began, “I heard that you’re going around pretending to be a bachelor and that you sincerely requested to the staff that we don’t talk about [Kim Tae Hee during the show]. Even Seo Jang Hoon and Lee Sang Min [who are both divorced] don’t pretend to be bachelors. Why can’t you say that your wife is your wife?”

Seo Jang Hoon commented, “We understand why you [stayed silent] before, but it’s been a long time now since you got married.” Super Junior’s Kim Heechul added, “You’re not even wearing your wedding ring.”

Kang Ho Dong continued, “[Lee] Beom Soo, imagine this. You’re holding a special screening, and [Kim Tae Hee] shows up. It becomes a hot issue, and the entire country is talking about it. Wouldn’t that be a good thing?” Rain interjected, “Actually, she’s coming to the VIP screening.”

However, Kang Ho Dong didn’t stop asking Lee Beom Soo questions about imaginary scenarios, and Rain finally shouted, “How much longer are you going to do these outdated things on variety shows?” Lee Sang Min responded by demanding to know what the actress was up to lately.

Rain explained, “I never said that I wouldn’t talk about her. But these days, no matter how carefully I talk about her, it comes back to bite me. I want to separate my work from my family life, and so I’m being more careful. It’s not that I won’t talk about her. It’s just that I love her and cherish her so much.” 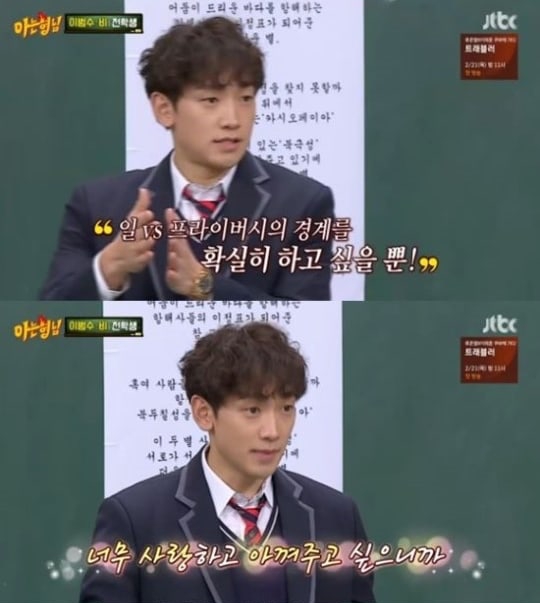 The cast members then brought up Rain’s past appearance on the show in 2017, which he filmed shortly before announcing his engagement to Kim Tae Hee. During the show, Rain performed his song “The Best Present” for the first time, and it was only later that he confessed that it had been a proposal song.

When the cast accused him of proposing to Kim Tae Hee through the performance without telling them, Rain replied, “It’s true that I deceived you. I want to take this opportunity to apologize.” He added, “[Kim Tae Hee] really likes ‘Ask Us Anything.’”

Rain and Kim Tae Hee got married in January 2017 and welcomed their daughter in October of the same year. Check out Kim Tae Hee in her most recent drama “The Gang Doctor” below!