Rain recently opened up about making a comeback as a singer.

He appeared on MBC’s “Section TV” on December 3 to discuss a wide variety of topics and celebrate his 15th anniversary as a singer.

On how he felt about his recent comeback with “Gang,” Rain replied, “For the past four years, I’ve been busy with other things. I shot two dramas and did a few productions in China. But people kept telling me that they missed seeing my powerful performances on stage. So I went back to the mindset I first had 15 years ago and I worked really hard for this comeback. ‘Gang’ is the story of my life for the past 15 years.” 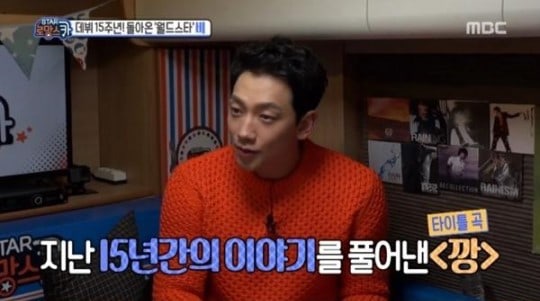 When asked whether it felt awkward to stand on stage again for the first time in a while, Rain said that it felt like coming home. He explained, “If I don’t work hard, I won’t be able to keep up with the younger singers. I at least wanted to show them what I can do as their senior.”

Rain recently made his comeback with his new mini album “My Life” on December 1. Don’t forget to check out the music video for his new title track “Gang.”