On the February 14 episode of SBS’s “We Will Channel You,” MC Kang Ho Dong and Irene sat down to talk.

In 2018, Red Velvet traveled to North Korea with a group of South Korean singers for a concert from March 31 to April 3, where the group performed “Red Flavor” and “Bad Boy.” Afterward, a group photo of the performers with North Korean leader Kim Jong Un created buzz as people wondered why Irene was standing close to the leader, while her fellow Red Velvet members were on the other side of the group.

During the episode, Kang Ho Dong asked Irene about the concert in Pyongyang and the group photo that had made headlines. He said, “There was so much talk about this. There was speculation that it was because Kim Jong Un is a fan. Another piece of speculation was from North Korean defector and pianist Kim Cheol Woong, who said that since Kim Jong Un pays a lot of attention to the South Korean news, he wanted to show that he was aware of Irene’s popularity in South Korea.”

Irene explained that that the speculation wasn’t true. She said, “After we performed, they asked us to gather and he came over. We got to take a photo and because it was sudden, everyone quickly got in position for the photo. The photo was taken and that was how it came out. You don’t know really where you’re standing when you’re taking a photo. After you take the photo, you realize that’s where you were standing.” 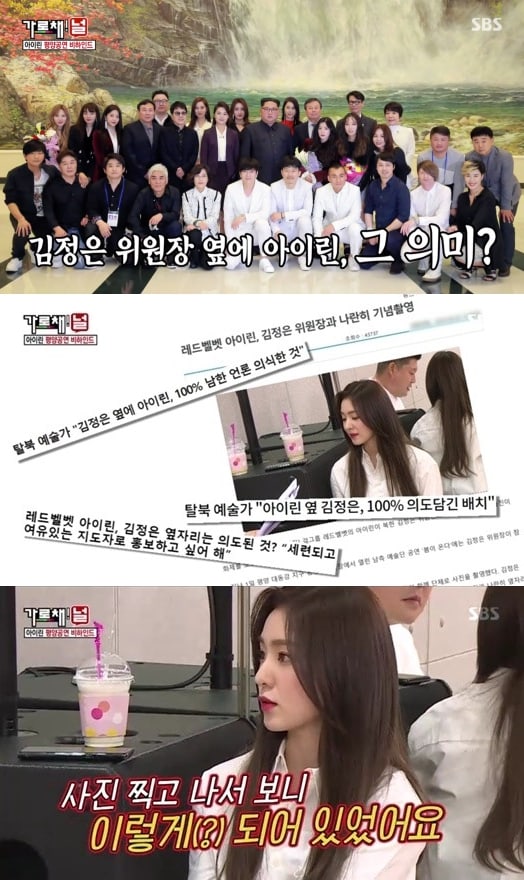 Irene said with a laugh, “I don’t even know why I was standing there.” Kang Ho Dong pretended to be disappointed by the lack of a dramatic reason and asked, “Did someone push you?” Irene laughed even more as she said that hadn’t happened.

She continued, “Even after we took the photo, we couldn’t see it since we couldn’t access the internet. I found out after I returned to Seoul.”

The MC commented, “But people tend to look around to see who they’re standing next to.” Irene explained, “I was so busy and the meeting wasn’t planned. I went because they asked the artists to stand together.” Kang Ho Dong asked if Kim Jong Un had said anything to her while they shook hands later on, but Irene said he hadn’t.