Review: “Show Me The Money 5” Members Turnt Up at U.S. Concert Tour

“Show Me The Money” (hereafter SMTM) has become one of the hottest reality TV shows where Korea’s best rappers duke it out to be the new king or queen of Korean hip-hop. Season 5 had some serious competition and although it didn’t have the idol backing like the previous season, the popularity has been no joke. The Show Me The Money Concert Tour made a stop in Chicago and Los Angeles and was nothing short of AMAZING.

Entering the Rosemont Theatre in Chicago, baseball caps filled the crowd at the 4,400 seated venue. Screams filled the room as promos for Crush’s First Solo Tour teased the crowd as they anticipated the start of the show. 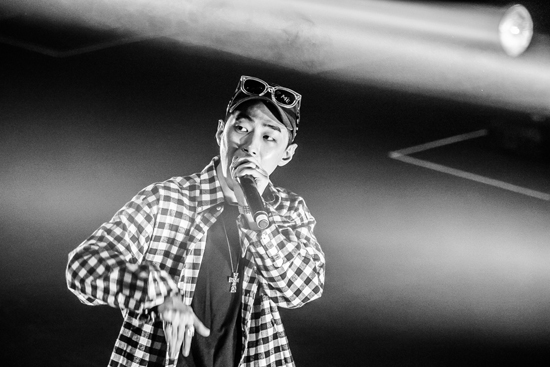 Although Rosemont Theatre is all seated, everyone rose from their seats as soon as the concert started. SMTM riled up the crowd with an ode to old school hip-hop in a video graphic that featured New York-style graffiti and B-boying.

“What we gonna do right here is go back!” That’s when Mad Clown stepped out onto the stage as the opening act. Mad Clown has joked several times about frequently forgetting his lyrics while performing, but this time he hit all his lyrics perfectly in his hit ”Bad Blood.”

The crowd was already hyped but then Gil entered and accompanied Mad Clown in performing their special stage and the room filled with roars. 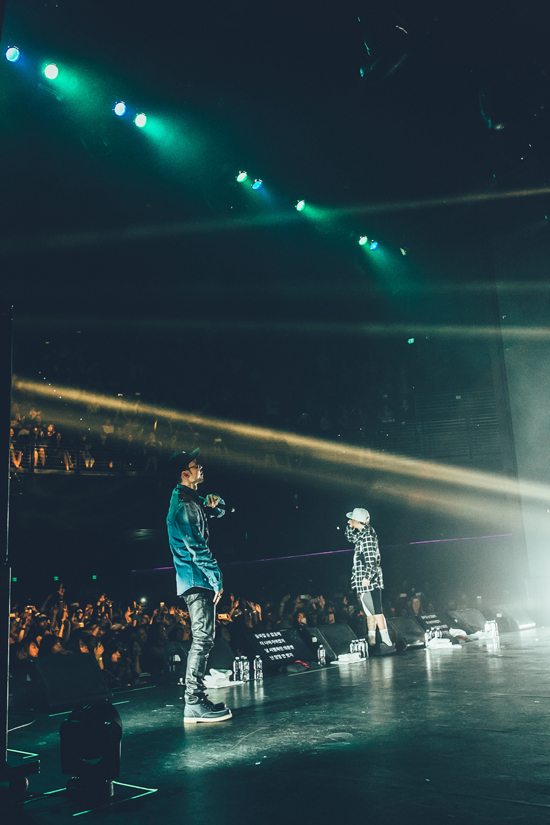 This was Gil’s first performance in the U.S. following his 2014 scandal and the crowd was happy to welcome him back to the stage. His enthusiasm was short of nothing as he sang his heart out in his classic kangol hat. Gil and Mad Clown performed a total of seven songs which started with “랩교 (Rap as a Religion) and ended with “Rush.”

Although Team Gil & Mad Clown were known for their awkward interactions this season, all of that was gone when they performed. Another video teaser started, and it became obvious that the teams would continue to perform in order of elimination from the show. That’s when The Quiett entered the room. The crowd went wild as Illionaire has been quite popular in the U.S. for the past few years with their simple concept of providing no frills, hard hitting hip hop. 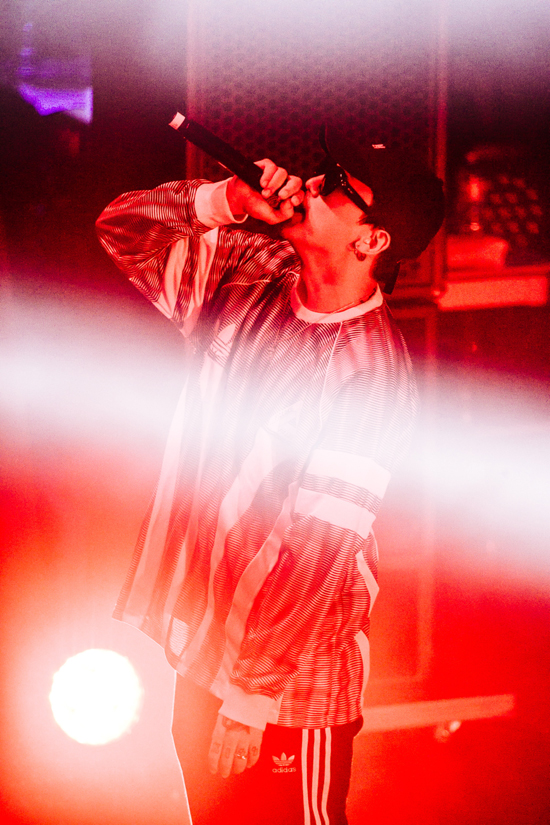 Illionaire symbols filled the room and stayed up for Illionaire’s full set of nine songs. Dok2 came on during the second song, “Beverly Ills,” which was obviously one of the crowd favorites.

Although Dok2 and The Quiett had a longer set than most of the other performers, they kept their energy up and delivered their rhymes flawlessly. With their last song “연결고리 (YGGR),” they continuously built up the chorus which hyped up the crowd so much that the room was going insane! Thousands of voices repeated the lyrics until the duo left the stage.

Next, confident ladies man C Jamm from Team YG hit the stage and kept the crowd laughing with his explanations of how he can’t speak English and random statements like “Chicago pizza is dope! Better than I thought!” and “ I love Michael Jordan.”

He introduced his hit “Beautiful” by saying, “Don’t call me handsome boy, I’m beautiful motherf**ker!” and continued to do a four-song set. 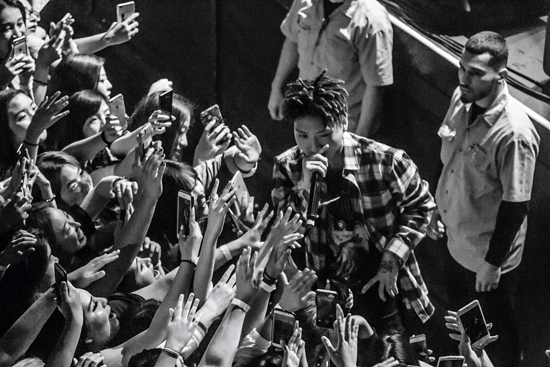 The concert had been filled with hard hip-hop sounds all night and that’s when Zion.T graced the stage with his soulful voice and popular song “쿵 (Koong).” The crowd went crazy as Zion.T hinted towards his three next songs and crowd kept guessing them right. Kush and C Jamm came back on for the SMTM hit “ Machine Gun” before Zion. T finished with “Yanghwa Bridge.” Of course Zion.T couldn’t exit the stage without his signature bow.

The crowd had been anticipating the final team, AOMG, and when Gray hit the stage teasing the ladies with his “SINGLE” shirt and the whole room filled with screams. He performed “Dream Chaser” and “Just Do It” solo before Simon D came on the stage. 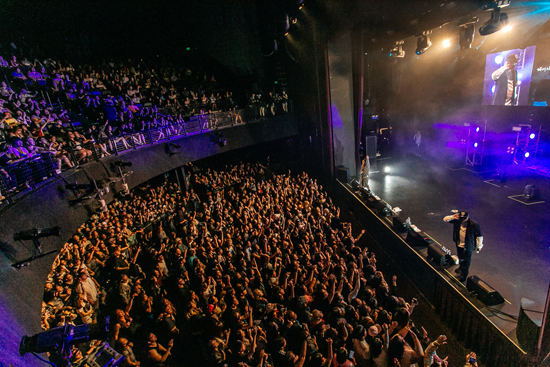 Although Korea’s hottest rappers had been performing all night, nothing could prepare the artists for the amount of screams when BewhY entered the stage. The energy multiplied as the the grand finale was just about to start –“I’m the hottest rapper of Korea. Korea rap star,” Bewhy introduced himself. He talked about his newest collaboration with American hip-hop legend Talib Kweli and how his main goal is to win a Grammy. Bewhy showed his charming side as he interacted with fans all night. At one point, a fan took a polaroid of him and he yelled “Suddenly!” which made the crowd burst into laughter. However, the highlight was when BewhY accepted a fan art portrait of himself that left him speechless. He also shared his love for Chicago pizza and shared how grateful he was to be there.

The interaction between the artists was priceless all night. When Simon D hit the stage, BewhY told him “ So handsome!” to which Simon D responded by saying, “ No plastic surgery, all natural!” and then continued to translate BewhY’s Korean into English. 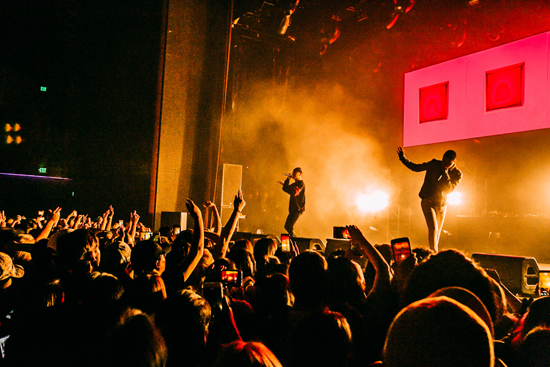 Gray announced that “Who You” would be the last song, but the crowd wasn’t fooled because BewhY still hadn’t performed his hit “Day Day,” which, to no one’s surprise, was the encore.

The “Show Me the Money 5” concert was a concert for the fans. It played out exactly like the special stages in the episodes. No one messed up their lyrics, they played the songs everyone wanted to hear, and interacted with the crowd as much as possible whether they knew English or not.

Hopefully the SMTM tour will come back again next year with an even bigger set list and roster!

Angie Mills is new to the Bay Area and has been working in K-pop for the last four years! When she’s not K-popping, she enjoys traveling, video games, and rock climbing.