The screenwriters of the upcoming drama “Rich Man, Poor Woman” shared their thoughts on the similarities between the cast and the characters they play.

“Rich Man, Poor Woman,” a remake of the 2012 Japanese romantic comedy of the same name, will tell the love story of the brilliant CEO Lee Yoo Chan, whose one fatal flaw is his prosopagnosia (inability to recognize people’s faces), and Kim Bo Ra, an optimistic job-seeker with an extraordinary memory.

The screenwriters of the drama remarked, “Although [Lee Yoo Chan] is confident about his work, he is both arrogant and blundering when it comes to his relationships with people. However, he has a hidden warmth on the inside, to the extent that he doesn’t want to admit it even to himself.”

The writers went on to share that they thought EXO’s Suho was perfectly suited to conveying the character’s softer side. They commented, “Kim Joon Myeon [Suho’s given name], who is playing the role of Yoo Chan, has a good, pure image that makes it impossible to hate him.” 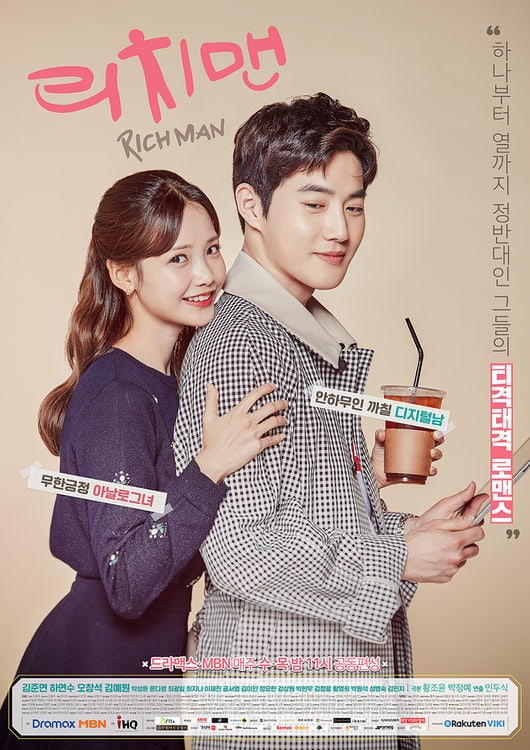 The screenwriters then discussed the characters played by actors Oh Chang Suk and Kim Ye Won, who will be portraying the accomplished siblings Min Tae Joo and Min Tae Ra. “Oh Chang Suk is playing the role of Min Tae Joo, a privileged man who has both skill and character, but is also extremely ambitious,” they said. “[Min Tae Joo] is warm at times and frosty at others, and we look forward to seeing Oh Chang Suk pull off both sides of the character.”

They continued, “Kim Ye Won is playing the role of Min Tae Ra, who is talented and perfect on paper, but is also a pure-hearted romantic. Kim Ye Won not only manages to pull off Min Tae Ra’s external image, but she also has the strength of being able to make any situation and dialogue her own.”

With the drama’s premiere only days away, the screenwriters expressed complete confidence that their leading actors were well-suited to their roles. “In terms of appearance, [the actors] all match their characters very well,” they noted. “We believe that their detailed acting and ability to pull off their characters will harmonize well within the drama. We’re looking forward to it.”

“Rich Man, Poor Woman” premieres on May 9 at 11 p.m. KST. The drama will be available with English subtitles exclusively on Viki.