During his acceptance speech, Hong Kyung became overwhelmed with so many emotions — one being sheer panic at the unexpected victory. As his voice began trembling and his speech getting entirely flustered… 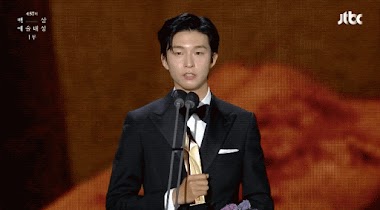 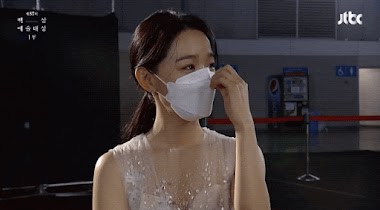 The… The lighting director… Oh gosh, what was his name again…? I, uh, I seriously can’t think of it right now, I’m so sorry. I don’t remember. I will call you all individually. I’m sorry…!

Even though he tried to pull himself together, Hong Kyung simply couldn’t deal with all his feelings. At one point, as his voice completely cracked on the brink of bursting into tears, he apologized for being an emotional mess… 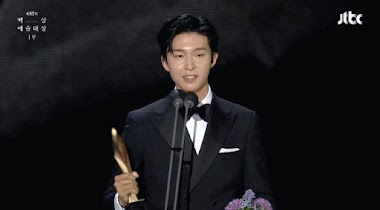 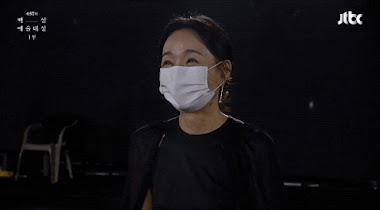 Oh, nooo… I really shouldn’t cry because this is being recorded and there will be videos…!

Then, Hong Kyung ended up addressing his stylist as “The same person who does Song Joong Ki sunbae-nim’s hair.” The comment inevitably made the audience crack up, including actor Yoo Ah In… 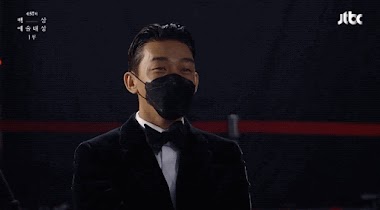 …and even Song Joong Ki himself. 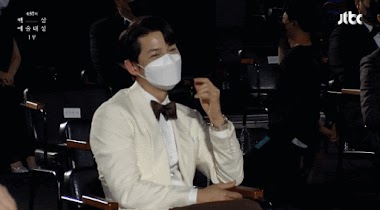 Oh no…! What— I can’t remember the styling team leader’s name now… Ugh…! I don’t remember, I’m sorry. But it’s the same person who does Song Joong Ki sunbae-nim‘s hair. I’m so sorry I don’t remember…!

Wrapping up, Hong Kyung made sure to thank his supportive family, which included his parents, his sibling, his grandmother, and — last but not least — his three dogs!

I have three dogs, by the way. Woni, Coco, and Leonardo DiCaprio. Thank you guys.

When JTBC released the full clip of Hong Kyung’s speech, Koreans became obsessed with how absolutely adorable the rookie actor is.

Hong Kyung debuted in 2017, with a KBS K-Drama. The movie Innocence marks the beginning of his career for the big screen though. And now, he has many new fans who look forward to seeing more of his not-so-panic-filled acting soon!

Hong Kyung debuted in 2017 with KBS K-Drama , though the movie Innocence marks the beginning for his career for the big screen. Watch his full speech here:

Hong Kyung is not the only rookie actor who couldn’t hide the excitement on the night of the ceremony. Check out another rising-star actor Lee Do Hyun get hopelessly lost on his way up to the stage!