On the December 3 broadcast of SBS’s “Running Man,” the members conquered their fears and rode extreme rides in Australia and New Zealand.

Yoo Jae Suk, Lee Kwang Soo, Ji Suk Jin, and Jun So Min traveled to Australia to receive their “cage of death” punishment, where they came face-to-face with crocodiles underwater.

Ji Suk Jin and Yoo Jae Suk went inside of the cage and started to scream as it filled up with water. Watching them from below, Lee Kwang Soo and Jun So Min were shocked at the size of the crocodiles and she wrote words of encouragement on a sketchbook to cheer on the alligators.

Lee Kwang Soo also experienced the “cage of death” for himself and coincidentally happened to be wearing the same color as the crocodiles’ favorite yellow toy ball. He became an instant hit with the crocodiles, and at the animal trainer’s request, Lee Kwang Soo gave one of the crocodiles a kiss through the glass. 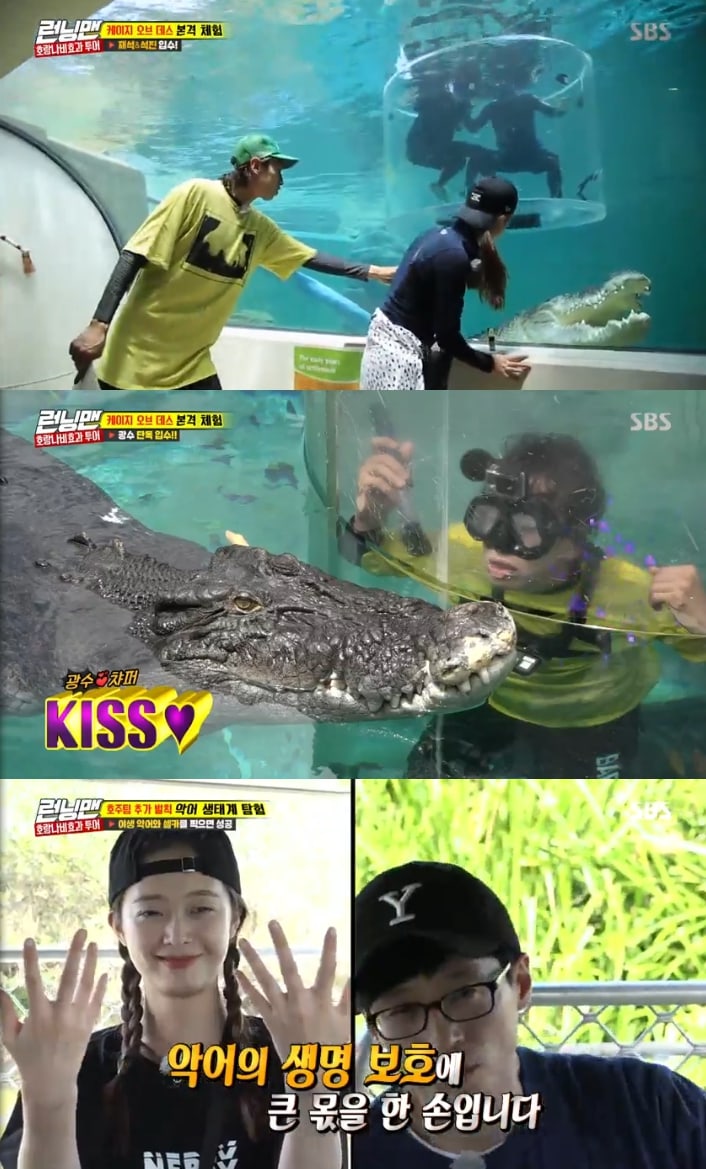 After completing the mission, the four of them decided to draw chance cards. They chose the card with the words, “We will not go…” on it, thinking it would be something positive. However, when pulled, the card read, “We will not go home until we receive a different punishment.” Yoo Jae Suk, Jun So Min, Lee Kwang Soo, and Ji Suk Jin were given the additional mission to take a selfie with a crocodile in the background.

Ji Suk Jin and Jun So Min carried out their mission and brought back a crocodile egg. With confidence from succeeding in her first mission, she also stepped up to the challenge of feeding the crocodiles.

After two hours of waiting, a crocodile appeared, but Yoo Jae Suk dropped his phone and the food for the crocodiles, and got yelled at by his fellow members. However, Lee Kwang Soo was able to capture a crocodile in the distance eating in the background of his photo, narrowly succeeding. 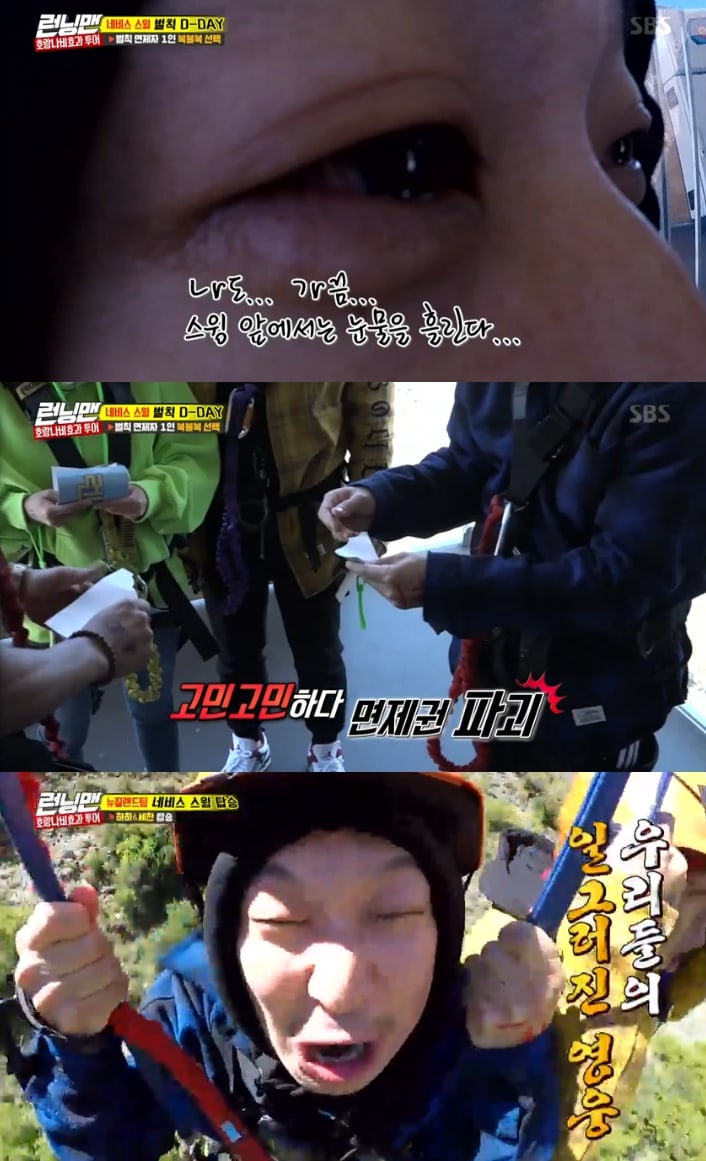 Haha, Kim Jong Kook, Yang Se Chan, and Song Ji Hyo went to New Zealand to ride the Nevis Swing. They were also presented with chance cards, where one lucky member wouldn’t have to ride the swing.

Haha looked absolutely terrified during the bus ride and said he couldn’t breathe, while Yang Se Chan, who made fun of Haha the entire time, shocked everyone when he vomited upon arrival.

Out of the four members, Kim Jong Kook was the least nervous and drew the lucky exemption card. Haha stood on the take-off platform and even shed tears out of fear. He got on his knees to convince Kim Jong Kook to give him his exemption pass, which Kim Jong Kook waved in front of him and told him to catch. However, Kim Jong Kook ended up ripping the pass and joined his fellow members in their punishment.

Haha and Yang Se Chan’s swing ride was full of screams and cursing as the two rode in fear. In contrast, Kim Jong Kook and Song Ji Hyo surprised everyone by riding upside down with their faces facing the landscape.