Samsung Group chairman Lee Kun Hee has just passed away, and his passing could have some serious implications to the South Korean economy as a whole.

Samsung announced Lee Kun Hee passed away at the age of 78 earlier today.

We have decided to hold a simple funeral in accordance with the wishes of the bereaved’s family.

We politely decline all condolence visits and funeral wreaths.

Lee Kun Hee was the 2nd chairman of Samsung Group, taking over in 1987 after his father Lee Byung Chul, founder of Samsung. However, in April 2014, he suffered a heart attack and was required to be hospitalized, but simply disappeared from the public eye. Since his hospitalization, he was not seen by a single public source until the announcement of his death, nearly 6 years and 6 months later.

The reason why his death is so important and has so much influence in the South Korean economy is because on an average year, Samsung products account for 20% of the exports for the entire country of South Korea.

Samsung usually accounts for 20% of the exports of the entire country of South Korea. As a single group, it’s a conglomerate with either large or controlling market share in tech, construction, finance & insurance, hospitality, security, travel, food, retail producing 12% of GDP. pic.twitter.com/B3Wandbhas

Overall, Samsung controls around 40% of market capitalization in South Korea, triple the amount of the next highest conglomerate in Hyundai. The impact that a Samsung stock crash or volatility could have on the economy is huge. 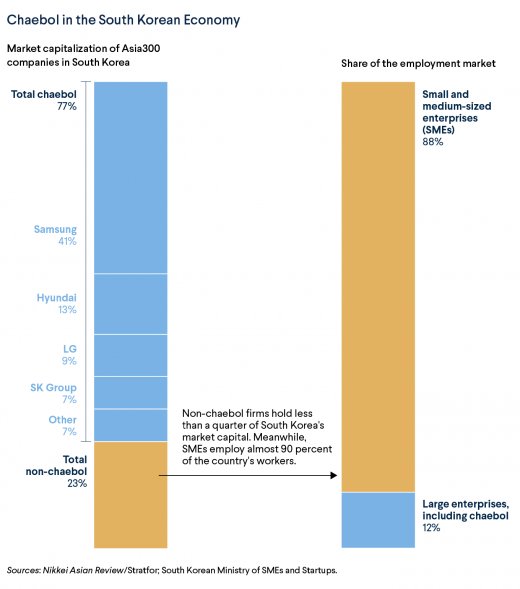 In addition, due to South Korea’s inheritance laws, any inheritance over ₩3 billion KRW is taxed at a massive 50% rate. Adjusted for the current KRW to USD ratio, that is over $2.7 million USD. As it stands, his family will be receiving an inheritance of around ₩16.8 trillion KRW, which is around $14.9 billion USD. $7.45 billion of that will go straight into the government’s wallets, meaning Lee Kun Hee’s family will be forced to sell off their personal assets, weakening control.

Enter Korean tax code. Korea has 50% inheritance tax on assets above $2.5m. When Lee Gunhee dies, his family will owe the government $7b. The family will have to sell personal stakes of Samsung-controlled assets, weakening the strong, complex investment structure they built. pic.twitter.com/zzuXAoYiAP

His death is also significant as it was personally announced by Samsung. Back in 2014, a whistleblower reported his death, but no follow up was provided as the whistleblower mysteriously disappeared shortly after. It is widely assumed by reporters that Samsung was actively trying to hide Lee Kun Hee’s condition.

Due to the scale of Samsung and the requirement of the sale of assets, there is concern of volatility in the stock market when the bell rings at 9am KST on October 26, the first day of trading following the weekend. This may give investors time to investigate the situation, but there will undoubtedly be some who immediately sell their shares.

So they announce it on Sunday morning when nobody can panic-sell their shares pic.twitter.com/ipNh8ZOqah

However, it is entirely possible that Samsung has worked things out the government, leading to the decision to officially announce his death.

i think the family already figured out how to pay that amount and thats why they let the man finally go https://t.co/HEYyYp4EhL

The question also now turns to the following: Who will take over the chairman position for Samsung? As the position is likely to stay within the immediate family, the top three candidates are his 3 remaining children: Lee Jae Yong, Lee Boo Jin, and Lee Seo Hyun. A third daughter, Lee Yoon Hyung, took her own life in 2005. There is disagreement on whether there will be a power struggle to claim the chairman position, or if it will be solved amicably. 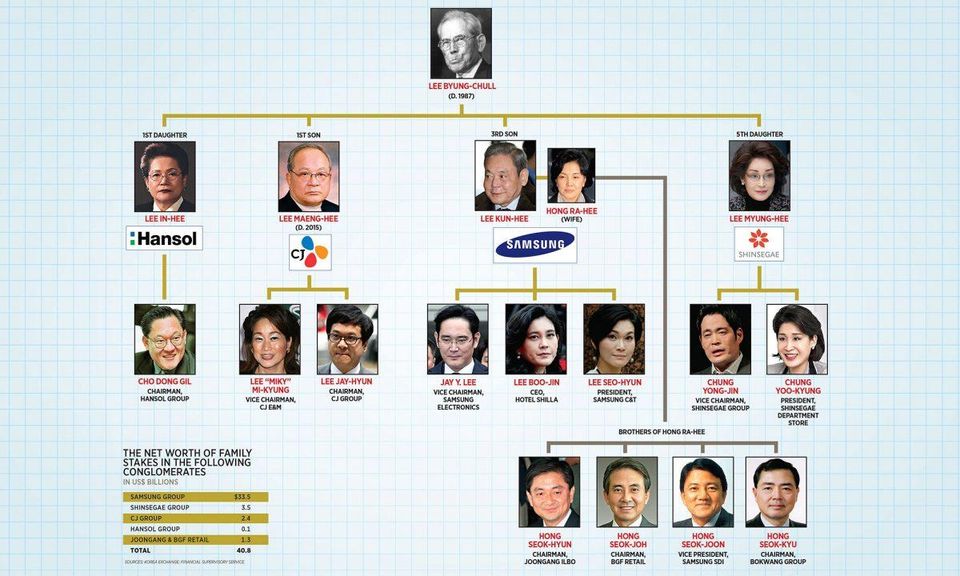 Lee Jae Yong is the frontrunner for the chairman position, being the only son and the most well known child. He is already the Vice Chairman at Samsung, and has been the most public of the three children. He has had his share of controversies however, being implicated for bribery during the Park Geun Hye scandal.

Lee Boo Jin is considered the main rival to Lee Jae Yong. As president of Hotel Shilla and co-president of Cheil Industries, she has shown herself capable of management and business, with two of her biggest accomplishments being the introduction of global luxury fashion brand Louis Vuitton to Incheon International Airport, making it the first storefront in an airport in the world, and being credited with the rise and success of duty-free stores in Korea.

Lee Seo Hyun is widely not considered a potential candidate for the chairman position, as she tends to stay more under-the-radar, managing Samsung’s fashion business. Their companies include 8seconds and BEANPOLE.