On April 23, YG Entertainment revealed on their official blog the poster for the SECHSKIES exhibition, “YELLOW UNIVERSE.” This exhibition was included in the previously released teaser poster announcing the group’s 20th anniversary project.

The poster features the exhibition’s exterior in an abstract composition. SECHSKIES member Lee Jae Jin provided input in the creation of this symbolic image. 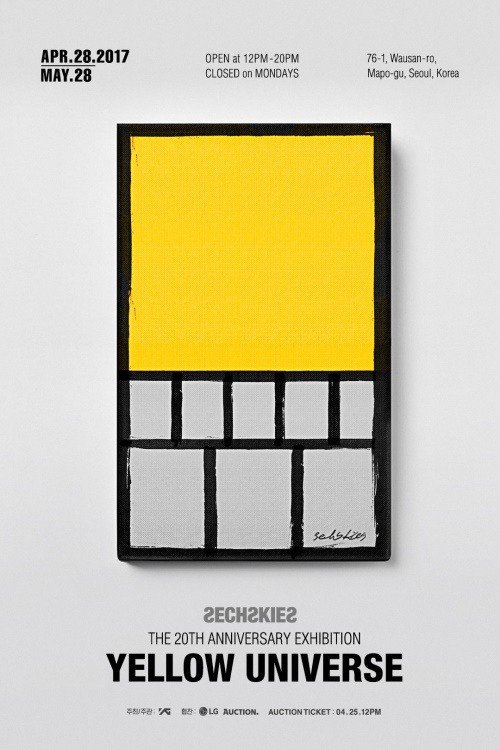 Commemorating the 20th anniversary of SECHSKIES’s debut, the exhibition theme comes from the words “now, here, us” from the group’s song, “Three Words.” This was the first song the group released upon reuniting 16 years after their original disbandment. For the exhibition’s theme, the order of the words is meant to be changed to read as, “us, here, now,” to represent their past, present, and future, respectively.

“YELLOW UNIVERSE” will display the outfits the members wore on stage, their personal belongings and collected items, as well as contents prepared for their comeback. Photos from their 20th anniversary pictorial will also be on display.

The members included their personal touch to the exhibition to add greater enjoyment to visitors’ experience. From the first to fourth floor of the exhibition, there is an audio guide that includes each member’s individual perspective so that visitors can listen to stories about each item in the exhibition as they view them.

SECHSKIES’s new album “THE 20TH ANNIVERSARY” will be released on April 28, and the exhibition will open on the same day. The exhibition is scheduled to be held for one month, ending on May 28.

The album and exhibition are only the start of SECHSKIES’s special 20th anniversary project plans. The group also plans to hold a fan meeting, concert, and more.