“The Third Charm” is a romantic comedy that will tell a 12-year love story, following one couple from the tender age of 20 all the way to 32. Seo Kang Joon and Esom will star as lovers with dramatically different personalities: On Joon Young (played by Seo Kang Joon) is a model student who never deviates from his meticulously scheduled routines, while Lee Young Jae (played by Esom) is spontaneous, loud, and refreshingly honest.

The newly released main poster depicts the couple reuniting in Portugal, 12 years after they first met in college. In contrast to the youthful and lighthearted teaser posters released earlier this month, the romantic main poster shows a mature and wistful Seo Kang Joon and Esom looking both awkward and tense as they walk the picturesque streets of Portugal together.

The poster also bears the dramatic caption: “And so the two of us met three times.” 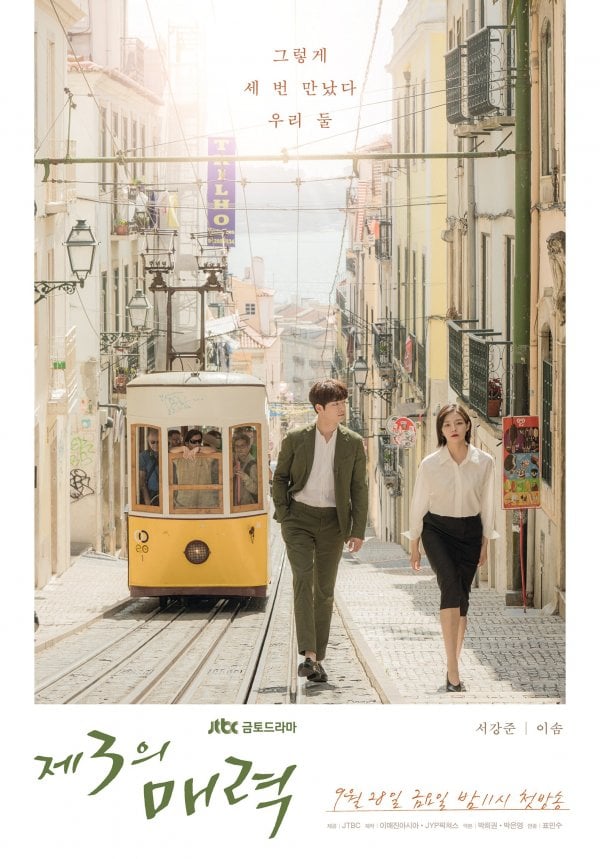 The producers of “The Third Charm” remarked, “During the poster shoot, which took place in Portugal, Seo Kang Joon and Esom were the very essence of [their characters] Joon Young and Young Jae meeting again at the age of 32. The image chosen for the main poster was immediately given the green light.”

They went on to add, “The actors’ realistic performances and the beautiful Portuguese scenery will be conveyed through the drama. Please tune in to see how the two characters ended up reuniting in Portugal and what kind of ending they will give their story.”

“The Third Charm” will premiere on September 28 at 11 p.m. KST. Check out the latest teaser for the drama here!