Seonghwa Finally Showed His Abs In ATEEZ’s Latest Performance Teaser, And ATINYs Are Not Okay

ATEEZ is set to have a much-anticipated comeback on May 29 with ATEEZ ZERO: FEVER Part. 1, and they’ve been teasing fans with instrumentals and snippets of the songs “INCEPTION” and “THANXX”, along with gorgeous teaser images.

On July 17, the group dropped short performance previews of both of the songs as well, and fans are losing their minds over some of the blessed visuals that they’re receiving for this comeback.

Seonghwa in particular is being praised and complimented for the crop top he’s wearing in the “INCEPTION” performance teaser, which made him flash impressively toned abs during the dance.

so you’re telling me.. inception is giving me amazing choreo, seonghwa falsetto AND seonghwa abs? .. this shouldn’t have even been a choice, they should’ve just given us this single and called it a gift. pic.twitter.com/MtNArX4jBi

He’s not one of the visuals of ATEEZ for no reason! He has also teased his abs in the copy of BAZAAR magazine that the group has a photoshoot in, making fans feel even more blessed. 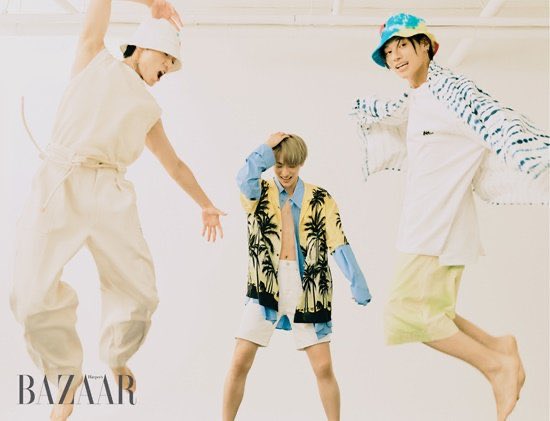 Other members of ATEEZ are being discussed for their visuals in the performance videos as well. Wooyoung‘s mini ponytail in the “THANXX” teaser, in particular, is making ATINYs squeal.

admit it we all have a crush on this wooyoung in ponytail saying gracias pic.twitter.com/LbP0fgVjh9

I can’t help but looking at Wooyoung’s ponytail shadow???? pic.twitter.com/TWL5OKyqba

Everyone is also in love with Yunho‘s colorful highlights…

will i ever get over slick back/undercut/blond hair wearing sunglasses mingi? NO pic.twitter.com/3tuqrPq1rC

no but mingi undercut superior pic.twitter.com/e9qKXnTxE6

I still can’t believe we’re getting San with the lip piercing I see that death is painful pic.twitter.com/XIkHyWMCr7

As well as Hongjoong in a skirt.

hongjoong in a skirt with that snatched waist??? i think fucking yes pic.twitter.com/9CUlraYNwZ

In short, ATEEZ’s visuals are stunning this comeback, and they’re really treating ATINYs to these incredible teasers and previews!

this comeback is wild we got mingi undercut, yeosang bandana, wooyoung ponytail, hongjoong in skirt, seonghwa in those long gloves, yunho peach hair, san lip piercing, jongho forehead at one time. i don’t think i will survive this comeback

Watch the performance videos below: