Seungjae became emotional after seeing his dad’s arm in a cast on KBS 2TV’s “The Return of Superman.”

On the May 27 episode, Go Ji Yong appeared with his right arm in a cast. He explained during his interview that he hurt his arm while exercising and the doctor told him to keep it in a cast for three days.

At first, Seungjae didn’t believe that his dad was really hurt. However, after seeing his dad having difficulty opening a water bottle, he realized it was real and began to get teary-eyed.

Seeing his dad sitting on the couch with his right arm in a cast, Seungjae began to cry. Go Ji Yong was surprised, but was also moved by his son’s tears. Reassuring him, he said, “I can still use my left hand.” 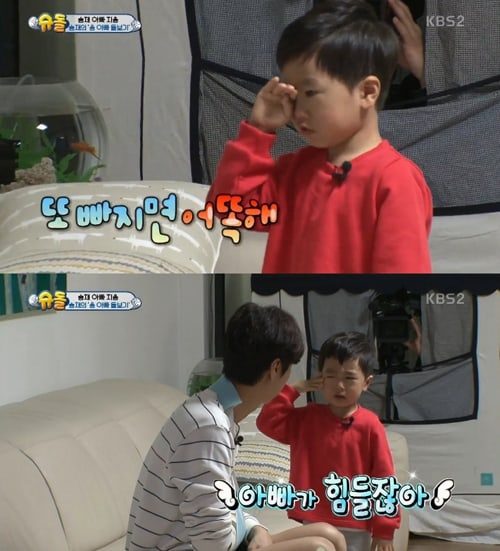 Seungjae replied, “But you can’t use your right hand and you can’t cook. You can’t play with me.” Go Ji Yong stated, “We can eat out,” but Seungjae thought back to the moment his dad’s wallet fell in the ocean and responded, “But you don’t have a wallet.”

Go Ji Yong explained to his son that he can help him brush his teeth and wash his face, and Seungjae went to the bathroom to lend a hand in hopes of making his dad feel better.

“The Return of Superman” airs on Sundays at 4:50 p.m. KST. Check out the latest episode below!