Despite his nickname, Angel, SEVENTEEN’s Jeonghan also has an evil and scheming side to him. That’s right, SEVENTEEN’s angel loves to cheat when it comes to games and missions! In fact, his other nickname is “Yoondache” (Yoon Advanced Cheater).

1. Jeonghan taking a short cut towards the finish line

2. Jeonghan’s savageness was just too much for poor Jun

Jeonghan cheated more than once in Four Wheeled Rider. Rule breaker Jeonghan continuously sabotaged innocent Jun’s items (items that either boosts the carts or delay them in the race).

3. Let’s not forget the most impressive cheat of Jeonghan’s in Four Wheeled Rider

Jeonghan straight out asked whether he could cheat and it wasn’t a surprising question to the members.

Instead of blindly paddling through a maze of traffic cones, Jeonghan decided just to enter the finish line from the back and it was pretty awesome!

In another “GOING SEVENTEEN” episode (He cheats a lot in the series), the members are given a word and are needed to match answers. To ensure victory, the witty Jeonghan whispers the shared answer they should write down.

They were so shameless…

5. This one is pretty genius!

In a race against one another, SEVENTEEN is challenged to see which member could run up several stairs the fastest. Once again, Jeonghan has spotted a way to make things easier on himself and ran up the moving escalator!

His genius plan did work in the end.

6. He cheats even when he knows people are watching! He’s too confident with cheating it’s inspiring!

In a timed mission to fill a bucket up to a certain line of tape, Jeonghan checks the bucket out. Making sure no one is watching, Jeonghan readjusted the tape to a lower level.

7. His devilish smile definitely made Carat’s heart skip a beat

In the same game as #4, Not only did Jeonghan cheat by lowering the tape line, he also started to fill the bucket before the member in front of him passed it to him.

Jeonghan continuously cheated this way throughout the game. He celebrated his evil work with a devilish, yet handsome smile! 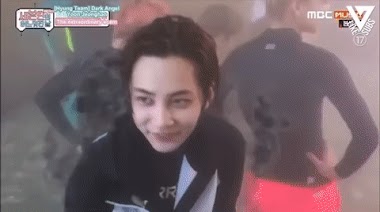 8. Jeonghan can’t miss the opportunity to mess with his beloved maknae Dino

While trying to see who could hold their breath the longest…

… Jeonghan signaled all his members to come up from the water except Dino.

Though Dino was suspicious, he took the punishment. Jeonghan has 0 mercy even for the sweet maknae.

9. Jeonghan’s next target for his cheating ways is innocent DK

During their Idol Room episode, Jeonghan needed to name all of his members without hesitation or mistake. Unfortunately, he got tripped up when he got to DK. Though it was Jeonghan’s mistake, he repeatedly teasingly lied and blamed it on DK’s “dirty look.”  It’s okay DK! We know you’re innocent!

While trying to see how many times he could press the “9” with his head, Jeonghan instead uses one of his fingers. When his time is up, actor Jeonghan glanced at the calculator and acted shocked. 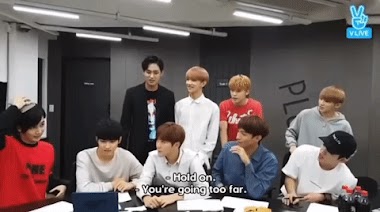 11. He’s such a great influence on his member

While doing a hula hoop competition, Jeonghan runs over to the other team and just tosses their hula hoop in the air. Because of Jeonghan, the whole game became chaos as everyone started to cheat!

12. Jeonghan won’t hold back on cheating if foods involved—Okay… that’s a mood!

During Idol Room, MC’s Doni and Coni shared that if all the members picked the same food off the menu, they would order it for them.

13. Jeonghan cheating?…never! He was just a little sick during this game…or was he?

During this particular game, each member needed to sing the correct lyrics to the given song. Woozi started off the round and his facial expression showed he was clueless about the lyrics. To save Woozi, Jeonghan coughed so the people behind the camera couldn’t hear if the lyrics were correct or not.

14. He literally could be a ninja with these skills!

Grabbing ingredients while being timed, Jeonghan accidentally forgot the salt. Figuring this out, Jeonghan nonchalantly walks to the ingredients table and slides the salt into his pocket.

15. He just wants success for his members, is that so bad?

While some group members struggled to find what was missing in their own photo, intelligent Jeonghan spots the answer from the back and slyly whispers the answer to the members playing the game.

16. How does he come up with this stuff?

17. Now this moment just proves Jeonghan is actually a genius

During Show Champion, Hoshi through out a crazy math equation to Seungkwan, and while he struggled, Jeonghan answered it. Of course, the answers he was giving were all random numbers but the members acted impressed!

18. He’s really just trying to help out… just… in the evilest way

In another challenge, Mingyu was tested to see how long he could hold a note. While it was evident Mingyu was losing air, Jeonghan stood in front of Mingyu, backed-turned to the camera, and started to sing the note so that Mingyu could take a breath and continue without being noticed…we noticed Jeonghan.