On February 3, SEVENTEEN‘s vocalist Jun took to Twitter to announce the release of his second Chinese solo track, “乌鸦 (Crow),” only giving fans two days to anticipate its release on February 5.

Needless to say, he succeded in surprising Carats, who took to Twitter to shower Jun with praise and make their eager anticipation very clear. 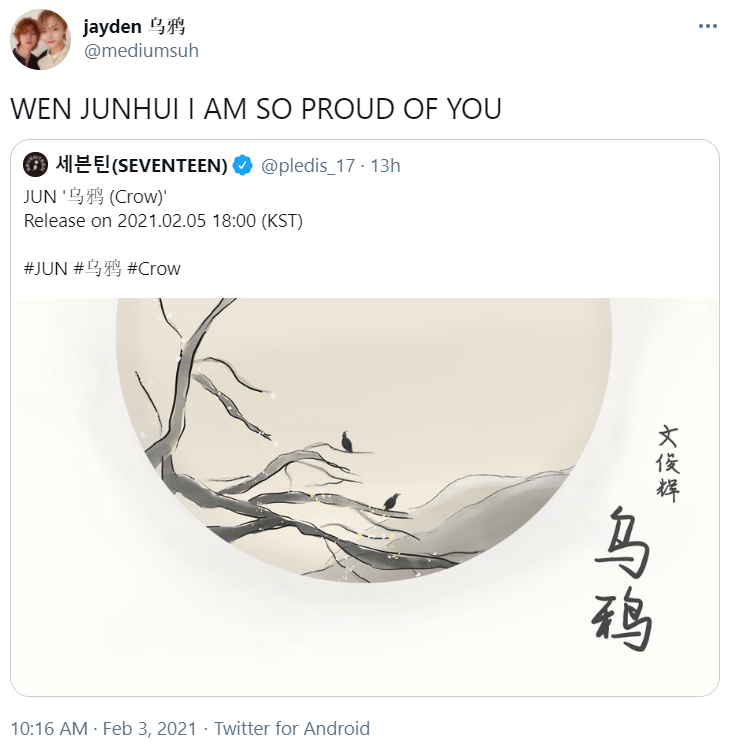 More analytical fans broke down the title to try and figure out what it would be about.

Jun's new solo is called Crow(乌鸦)
in Chinese legends, there used to be 10 crows representing 10 suns that burned the earth so an archer shot 9, leaving the last crow to represent the sun we have now

Crows in Chinese lit are usually a sign of a bad omen, sadness or loss pic.twitter.com/sXqf8n03F9

However, Jun has been hinting at a solo track for some time now. During a fansign call, he told one lucky Carat that he had big plans for 2021.

In an interview with Harper’s Bazaar Magazine in January, he even stated that he had written lyrics for a Chinese song but that they were a secret.

Thankfully, fans won’t have to wait long for the secret to be revealed, with “乌鸦 (Crow)” being released on February 5!