SEVENTEEN‘s THE8 recently released some behind-the-scenes footage of the shooting of his incredible “Side By Side” music video! During the music video shooting, several members of the group showed up and showered THE8 with loving support! 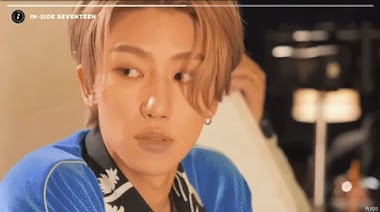 DK, Dino, and Jun were all three featured in the music video as special cameos. While watching THE8’s solo scenes, the three couldn’t help but express how proud they are of him. 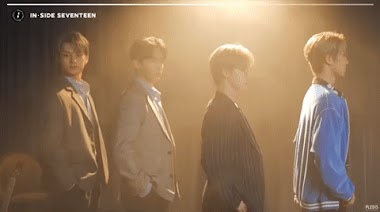 DK shared, “Seeing him filming such a cool solo MV makes me proud.” DK was so happy for THE8 that he expressed how he felt like a “Proud dad” watching his son. DK adorably stated, “I feel like a proud dad. My son…THE8” 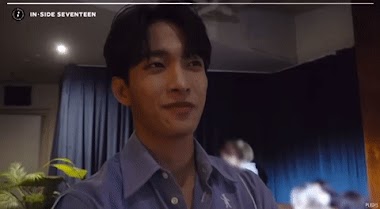 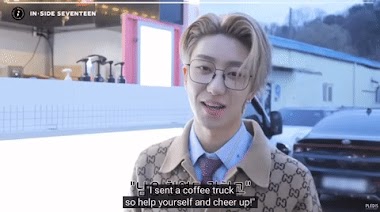 Of course, Jun also couldn’t help but continuously shower THE8 with compliments and praise! 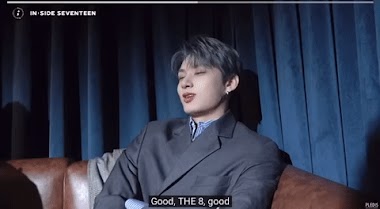 Jun also revealed that when THE8 visited him on his “Silent Boarding Gate” music video shooting, he felt a little taunted by his presence. As the playful person he is, Jun shared he wanted to tease THE8 back. Though he felt the urge to playfully taunt THE8, he didn’t go through with it. Their friendship is too cute!

Back when I was filming my music video THE8 came to see me and taunted me a little. When the camera was filming the other protagonist and I were acting and THE8 was standing next to the camera smiling like a proud mom. ‘So nice.’ He was like that. So I want to tease him a little today. But I feel like this isn’t the right time. 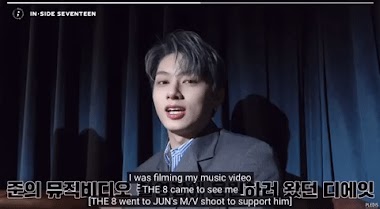 The group’s maknae Dino conveyed his support and claimed he wanted to do his best as one of the music video cameos to match the song’s amazing quality.

I came to appear in THE8’s solo music video as a cameo. I came with DK and Jun, so I’m gonna try really hard with the shoot wishing that his song becomes a hit. 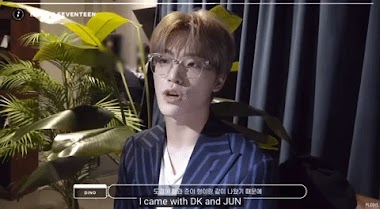 Some of THE8’s other fellow members who weren’t cameos also took the time to visit THE8’s MV shooting! Joshua appeared at the site and stated how proud he was of THE8 and all his hard work.

I’m here at THE8’s solo music video shoot. I felt so proud. THE8 took acting lessons just for this. I think you can really look forward to it. Please look forward to THE8’s acting, as he worked hard. Fighting! THE8! 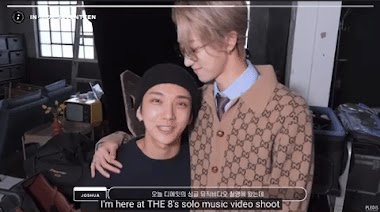 Wonwoo and Vernon also arrived at the shooting and quietly watched THE8 from behind the cameras. 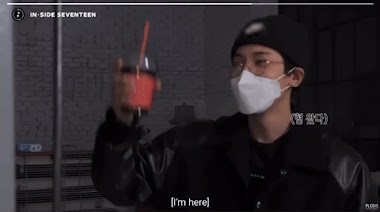 Though their smiles were covered by their masks, their eyes expressed their happiness for THE8. 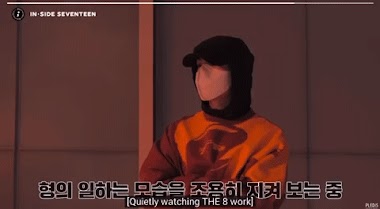 Hoshi, who also recently had his solo music video shooting for his mixtape “Spider” showed up with amazing energy! Once THE8 noticed Hoshi on set the two warmly hugged. Hoshi said to the camera, “You can always count on THE8. I’m sure he’ll do great. The song’s so addictive.” 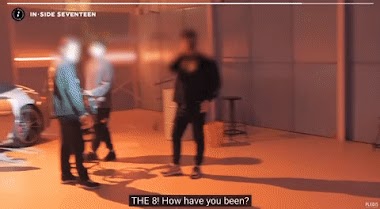 In between filming, THE8 asked Hoshi for advice. Like the sweet member he is, Hoshi gave some suggestions to THE8: “Try to look more innocent.” Toward the end of the shooting, THE8 revealed he felt “More energized thanks to Hoshi staying until the end.“ 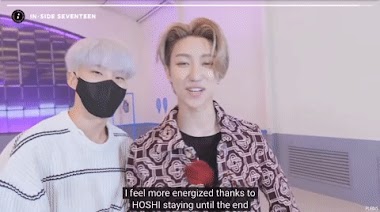 THE8 gave a final message to thank the staff and his fellow members for their help in creating “Side By Side” as well as showing endless support.

The staff and the members helped me and worked on this piece4 together so I feel very proud. I’m also enjoying being the representative to present this work. I want to show you more new sides of myself in the future. Please love and support my new song. Thank you! 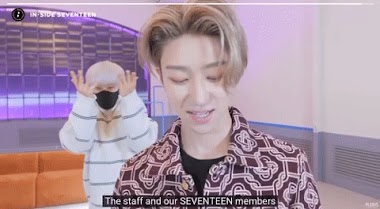