SHINee’s Jonghyun expressed his gratitude to his listeners on his last day as the host of MBC FM4U’s “Blue Night.”

The idol singer mentioned how he had talked about leaving the show three weeks prior, letting listeners know as soon as his departure date was finalized. He stated, “April 2 is finally here. There are so many people here outside the recording studio.”

In response to a text from a listener that read, “I’m grateful to have spent your first and last broadcast with you,” Jonghyun said, “Thank you for staying with me till my last day and cherishing my show. I usually don’t have a live video stream of my radio show, but I wanted to do that today. I dressed up and wore a blue suit for today [because it’s a special day].” 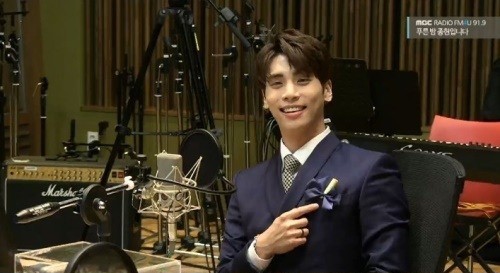 He gave his final farewells to his listeners as he said, “I received so many handwritten letters from people. I’m so thankful. I got emotional seeing all the blue envelopes that are filled with so many of your stories. I can’t believe I’m loved by so many people, little old me. Thanks to you, I feel so cherished and valued. I’ll take all your letters home and read each and every one of them.”

Jonghyun’s “Blue Night” hit the airwaves on February 3, 2014 and the singer has kept his spot as the show’s DJ despite hectic schedules. However, he made the decision to step down for his health as SHINee has tours in Japan and North America this year.