Shinhwa’s Andy and Jun Jin recently talked about still facing a dilemma in regards to addressing each other.

Veteran idol group Shinhwa will be guests on the May 19 episode of JTBC’s “Idol Room,” where they will reveal an ongoing conflict between some of the members. Despite being 20 years into their debut, the Shinhwa members still face confusion over how to address one another. While Andy is widely known as the youngest member in Shinhwa, he is considered a “fast” 1981-er by Korean reckoning, having been born in the earlier months of 1981. At the same time, Jun Jin was born in 1980, so the two could be considered same-age friends. 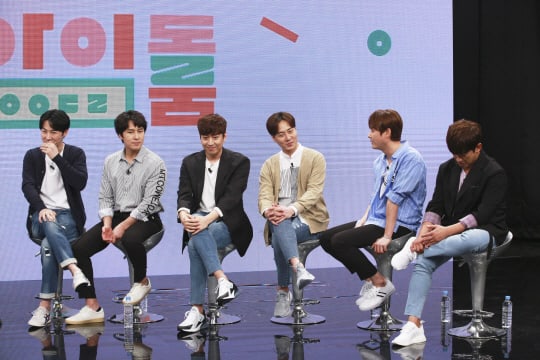 The two members brought up the dilemma at “Idol Room,” and asked whether they should establish an older-younger brother relationship or if they should regard each other as same-age friends. The rest of Shinhwa explained, “The two wait until they make eye contact to converse [to avoid calling each other directly].”

In regards to the issue, Jun Jin revealed, “It’s already been a long time since we decided to be friends, 12 years ago.” Kim Dong Wan countered, “But you still don’t address [Andy] directly, right?” causing everyone on the set to laugh.

The final decision for Jun Jin and Andy’s dilemma will be revealed on the upcoming episode of JTBC’s “Idol Room,” which airs Saturday, May 19 at 4:40 p.m. KST.