Rapper Sleepy got a touching message from BTS’s Jin!

It was announced recently that Sleepy had to undergo surgery on his ankle after he tripped on a set of stairs. On February 11 KST, Sleepy posted on his Instagram story to share a screenshot of a conversation with his friend Jin.

Sleepy received a message from Jin that read, “Take care of your health,” and Jin also sent two stickers of characters crying.

Sleepy wrote on the screenshot, “He went to the Grammys and worried about me…” and called Jin “my dongsaeng,” a term for a younger brother or friend.

BTS stepped on to the Grammy Awards stage for the first time ever on February 10 local time when they appeared as presenters. The ceremony ended around the same time that Sleepy shared his screenshot. 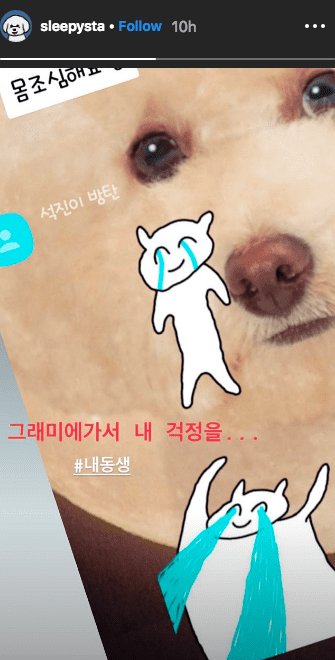 Sleepy and Jin became friends when they shared the experience of surviving in Kota Manado together for the reality show “Law of the Jungle,” with their season airing in 2017.