Representatives from SM Entertainment’s theater have addressed claims made by a fan of sexual harassment at a recent event.

After attending an event at SM Entertainment’s concert venue SMTOWN Theater in the COEX Artium, a fan claimed on Twiter that she was sexually assaulted by security staff under the pretense of checking for hidden cameras.

She wrote on April 6 in a series of tweets, “Wow… I got a call from Artium about the sexual harassment complaint… Artium’s customer service manual is really crazy…. It says that because EXO fans are younger than those of other groups, they have to be really strict about making sure fans follow the rules. But that doesn’t justify sexual harassment.”

“I’ve been to so many concerts, but I’ve never seen security that say they’re going to touch my chest,” she goes on to say. “They said that they had to inspect my chest because I could have hidden a camera in there…? I’d never heard someone say ‘I’m going to touch your chest’ before in my life until I went to Artium.’”

She says she spent thirty minutes on the phone with an employee at the theater, who also claimed that the security staff member was in the right because they recognized her fan I.D. and suspected that she’d have a camera.

She adds, “Also, the most ridiculous thing is that I told them that the manager told me to lift up my clothing so that he could touch my butt… and when I was searching for my seat, he grabbed my arm and pulled me towards the entrance, but [the staff on the phone] just said, ‘That’s not his nature.’” 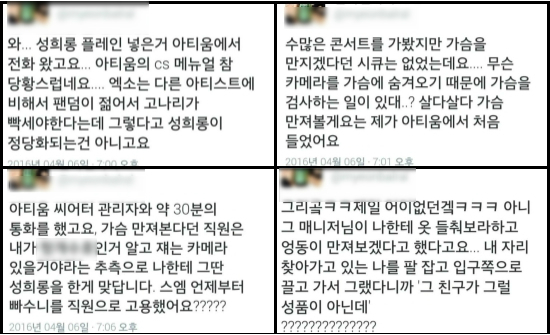 Although the fan’s Twitter has now been deleted, screenshots of her tweets have gone viral because they were posted on online communities. Another fan commented on one of these posts that they were once hit on the back of the head and on the back by a staff member at the theater’s entrance as a way of hurrying them inside.

A source from SM Entertainment said on April 21, “This is a common action by extreme fans. If a fan is touched in order to tell them to remove a camera they have hidden on their person, they call it sexual abuse. Because of the frequency of these complaints, a female employee will now be dealing with [inspections] directly. It wasn’t as serious a touch [as was claimed].”

Later on April 21, Dream Maker Entertainment, the company that operates SMTOWN Theater, issued a statement about the incident. The statement reads, “Immediately after the event in question, we investigated the matter internally, and confirmed that the customer’s claims were completely false. We could take immediate legal action due to the spreading of false rumors, but as the customer in question is one of our artist’s fans, we held a face-to-face talk last week with the customer before pursuing legal action.”

“However, the customer continues to make claims that are contrary to the truth, so we procured evidence (such as CCTV footage) to be certain about the truth,” they state, and say that attendees had been notified in advance that filming and recording was prohibited within the theater. “Attendees who were suspected of carrying equipment to use for recording were searched individually for hidden objects and given information on where to store them.”

“We have verified again that there was no physical contact or insulting remarks made during this procedure, and are currently preparing materials for evidence such as CCTV footage,” states Dream Maker Entertainment. “If it is not admitted clearly that these are false claims, we will have no choice but to hold them legally responsible, and we will deal with this quickly and strictly.”

What do you think of these claims and Dream Maker Entertainment’s response?