An old interview of the cast of Train to Busan is cracking netizens up!

In 2016, the five main characters of Train to Busan sat down with Pikicast to talk about their movie and the roles they played for the film. It was during the part where actress Sohee was speaking when the cast and the host cracked up in laughter. This specific segment has been making its rounds again online due to its hilarious nature. Let’s take a trip down memory lane and take a look!

It all starts when the host, Park Seul Gi asks Sohee about her fellow co-star Choi Woo Shik. In the film, the two actors portray a high school couple that are in love. When regarding him, however, Sohee gets noticeably flustered and responds with a shaky voice.

To which the host had to ask, “oh is he your friend?” Sohee responds,

This is when the rest of the cast members realize they can no longer hold in their laughter and decide to collectively laugh out loud to Sohee’s response.

After everyone settles, Sohee finally refers to Choi Whoo Shik as,

The lead actor in the film, Gong Yoo chimes in by saying,

Even if she dies, she refuses to call him oppa.

Sohee: It is because he approached me first as a friend.

Sohee: He is the movie set’s comedian.

While the two actors are known to be close friends, Choi Woo Shik is older than Sohee by two years making him an oppa to the actress. Typically in South Korea, honorifics such as oppa, are used when regarding someone older than you. Oppa, however, has an alternative meaning and can be used in a loving way when addressing an older male significant other. Sohee, who is known for her shy personality may have opted out of using this term with her close friend due to its potential romantic connotation. 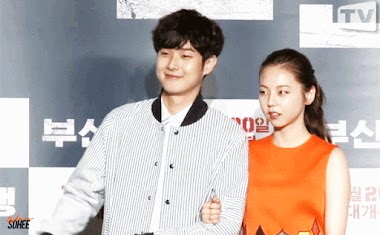 No matter the case, we love Sohee’s firm stance on the term and their close friendship! You can watch the comedic gold that is the Train to Busan interview down below.