Off to a fantastic start with historic viewership ratings, “Encounter” unveiled preview stills ahead of its second episode.

“Encounter” is a new Wednesday-Thursday drama that tells the love story of Cha Soo Hyun (played by Song Hye Kyo), a woman who was born into privilege but never had the chance to live a life of her own choosing, and Kim Jin Hyuk (played by Park Bo Gum), a cheerful free spirit with a pure and innocent soul. After the two meet through a chance encounter, they find themselves caught up in a heart-wrenching romance that turns both of their lives upside down.

In the released stills, Song Hye Kyo and Park Bo Gum run into each other in the hotel lobby as the CEO and a new employee, respectively. Even though they’re flustered and shocked, they can’t take their eyes off of each other. However, the strange anticipation and tension on their faces create questions about the fate of the two who will have to now face each other as a superior and subordinate. 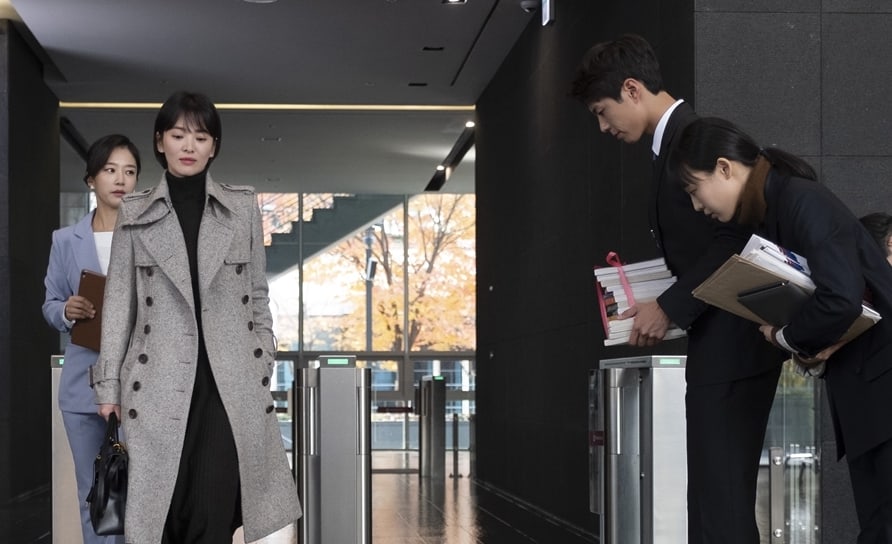 The production crew stated, “If the first episode portrayed their first meeting that was like a midsummer dream, episode two airing today [November 29] will officially start their meeting in reality. We ask you to look forward to the encounter between Soo Hyun and Jin Hyuk that was not expected in real life and the changes that will take place in the future.”

In episode one, Soo Hyun and Jin Hyuk fatefully met in Cuba. Soo Hyun left the hotel alone to see the sunset of Malecon Beach. Jin Hyuk felt strongly attracted to her looking precarious. They spent a sweet day together, and towards the end of the episode, Jin Hyuk learned that Soo Hyun is the CEO of Dong Hwa Hotel.

Watch the first episode here if you haven’t already: