On the May 20 episode of SBS’s “Running Man,” the cast’s look-alikes appeared to pair up with the members and play a series of games. 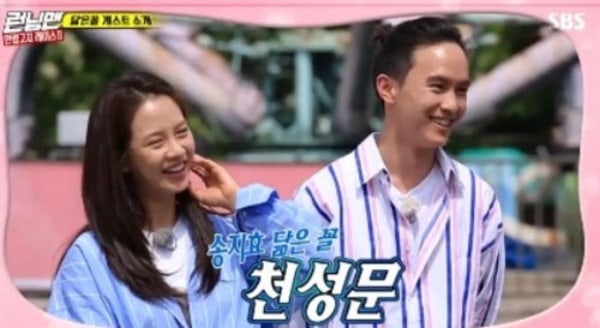 During the show, Song Ji Hyo and her younger brother Cheon Seong Moon showed off a great sister-brother chemistry. Yoo Jae Suk said, “Cheon Seong Moon reveals something about Song Ji Hyo every time he appears. Is there anything you want to add today?” He shocked everyone when he replied, “She’s so relaxed because we’re family, so she keeps the bathroom door open when she’s on the toilet.”

Song Ji Hyo quickly became flustered and stammered, “That’s not true.” Ji Suk Jin hilariously toldCheon Seong Moon off, saying that he shouldn’t have revealed so much. The actress explained, “I was watching television when I wanted to go to the bathroom. I was curious, so I kept the door open so I could keep watching.”

Hearing this, Yang Se Chan asked Jun So Min if she was that comfortable with her brother as well. “Actually, my brother and I are very relaxed around each other, too,” she shared. “My brother quickly runs past me with only his front covered after taking a shower.”