Recent fan-taken photos of him at the airport in Hong Kong are quickly spreading around social media.

In the pictures you can see the actor surrounded by a special security force.

More than anything else, your eyes are drawn to the guards circling him with hands clasped, as well as the crowd of people surrounding them. It’s not a completely unusual sight for famous celebrities to received this kind of protection, but it does indicate what kind of frenzy people expect for highly sought-after celebrities. 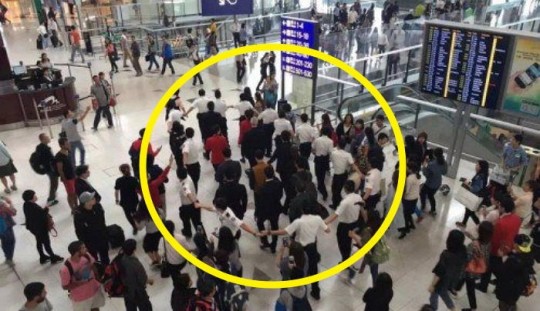 With the recent popularity of KBS2’s drama “Descendants of the Sun,” Song Joong Ki has been receiving a lot of love, and with increased popularity comes increased danger.

However, looking at the picture above, many netizens commented that Song Joong Ki was probably more embarrassed than anything else.

The actor had been visiting Hong Kong to attend the “Dior Homme 2016” winter collection fashion show on April 22.