Song Joong Ki shared some sweet comments during the 2017 KBS Drama Awards after his recent marriage to Song Hye Kyo!

The famous Song-Song couple became close while filming the KBS drama “Descendants of the Sun,” and the pair won the Grand Prize (Daesang) at the KBS Drama Awards in 2016. After their surprise engagement this summer and magical wedding in October, Song Joong Ki returned to the 2017 KBS Drama Awards to present this year’s Grand Prize award.

“I’ve returned here after a year, and I’m a bit more nervous seeing the senior actors who are here in front of me,” he said, and smiled as he greeted Kim Young Chul in audience. “While watching KBS dramas this year, I particularly enjoyed ‘Father Is Strange.’ Thank you for your amazing performance. I really admire you.”

He also said that while it would have been more meaningful if the two of them had been able to present this year’s award together, Song Hye Kyo unfortunately had another commitment and couldn’t attend. “She is doing well,” he said.

When asked by the host how his newlywed life is going, Song Joong Ki replied, “I’ve met my lifelong partner that I love so much, and so I think I will never forget 2017 in all my life. I’m not sure how to express how happy I am in words.”

When the host pointed out that it was a KBS drama that had introduced the two of them, Song Joong Ki replied in English with a laugh, “Thank you, KBS,” and added in Korean, “Thank you.” 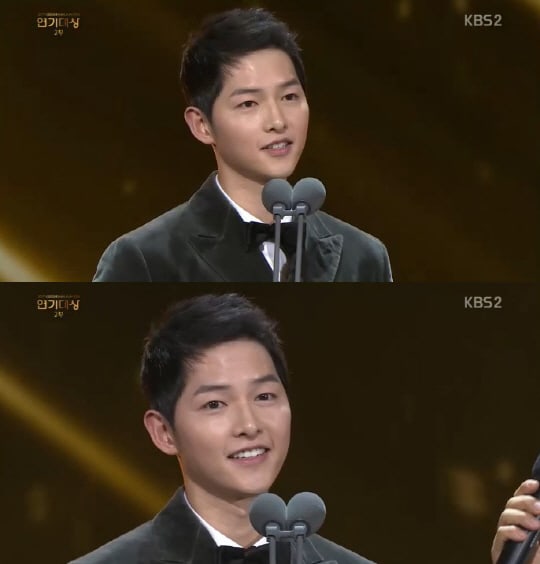