Song Seung Heon Talks About Marriage, Turning Down “Autumn In My Heart,” And How Shin Dong Yup Helped His Career

Song Seung Heon discussed his life and career on the latest episode of tvN’s “Life Bar.”

The cast of OCN’s upcoming drama “Player,” including Song Seung Heon, Krystal, Lee Si Eon, and Tae Won Suk, appeared as guests on the September 27 broadcast of the variety show.

Song Seung Heon famously catapulted to stardom after appearing in the popular 2000 drama “Autumn in My Heart.” However, the actor initially turned down the starring role.

Telling the story of how he almost didn’t appear in the drama, Song Seung Heon explained, “I had malocclusion [misalignment of the teeth] on the left side of my mouth, and I couldn’t chew very well, so I was driving to the dentist. My manager called me and asked, ‘Are you really not going to do [the drama]?’ [I told him,] ‘It seems like a good [drama], but after going to the dentist today, I think I’ll probably need to rest for a year to a year and a half.’ [My manager replied,] ‘I think it’s a really good [drama], but if you say so, I guess there’s nothing I can do.’”

“So I was parking in front of the dentist’s office,” he went on, “and my manager called me again. He asked, ‘Are you really not going to do it? Give me an answer right now, because I need to call them right now. Another actor might do it.’ So then, sitting there in front of the dentist’s office, I said, ‘Then should I do it?’ The drama that I filmed after postponing my dental treatment was ‘Autumn in My Heart.’”

He added, “If I had gone forth with my dental treatment, then I wouldn’t have been able to appear in ‘Autumn In My Heart.’” 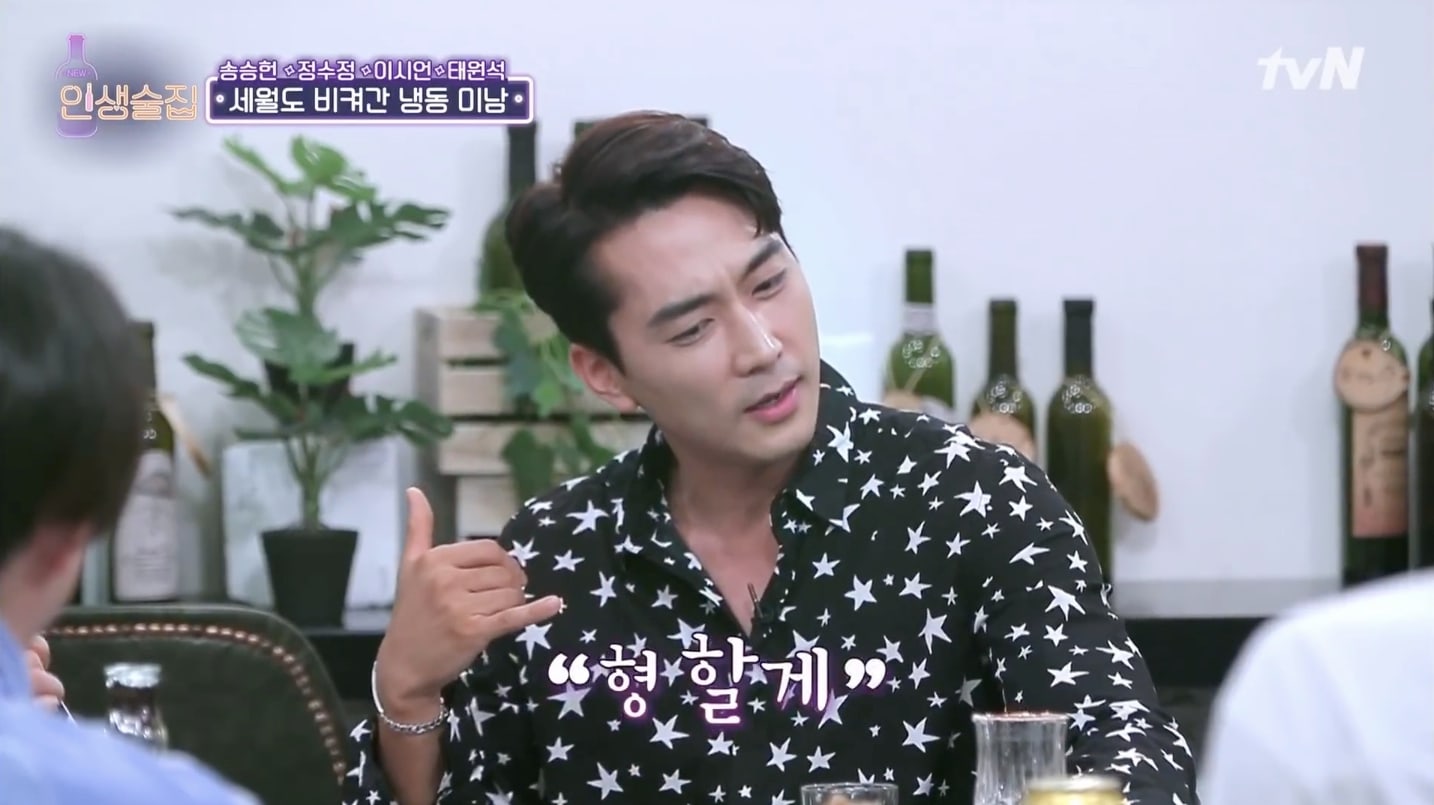 Shin Dong Yup then brought up the sitcom “Three Men, Three Women” (literal title), in which he and Song Seung Heon appeared together in the early days of Song Seung Heon’s career.

Shin Dong Yup recalled, “At the time, Song Seung Heon had never acted before, so it wasn’t just that he couldn’t memorize his lines. He was so unnatural that there was talk about replacing him, especially since he had to be funny. Half of the staff said that we should replace him, and the other half said that his acting would slowly improve. It was eventually decided that he would stay on for a little bit longer.”

Song Seung Heon replied, “I know that [Shin Dong Yup] told the staff that he would try [working with me] until the end and that he thought that I would make it as an actor. If I had stepped down from the sitcom at the time, then I might not be where I am today. I owe him a great deal.” 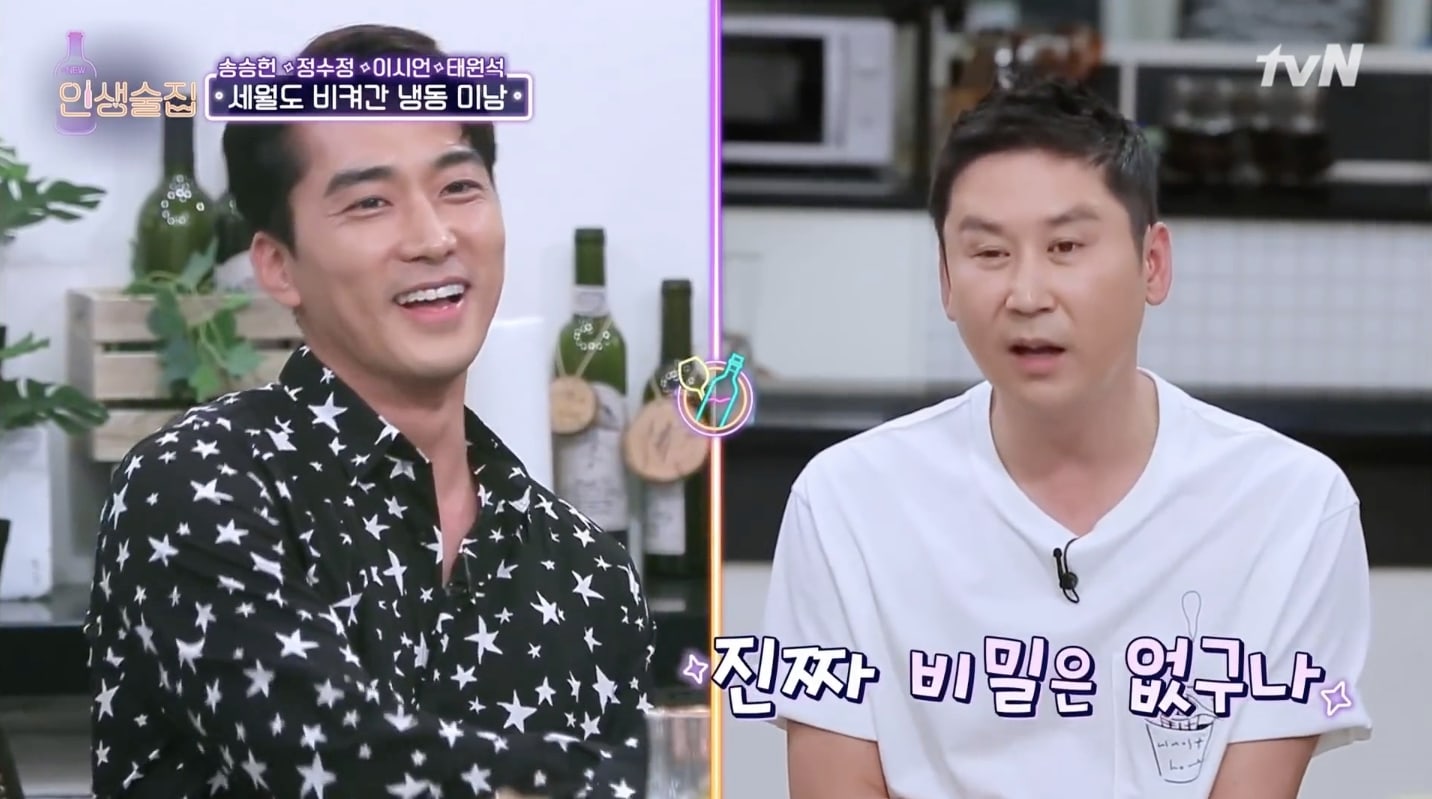 Song Seung Heon went on to talk about his concerns at the beginning of his career. He explained, “I hadn’t prepared to become an actor from the beginning, but I suddenly gained popularity. So I think I spent my twenties thinking, ‘What is this? What’s happening?’ Even in my thirties, I still worried a lot about whether this was the right path for me. Every single day on set, especially during the sitcom, felt like hell.”

The actor also touched on the topic of marriage. “I honestly don’t really get lonely,” he said. “I like meeting up with my childhood friends from middle and high school. We randomly call each other and get together to drink and hang out. But now, my friends have kids and families after getting married, so I recently began to realize that this is no longer possible. I think that once you get married, your life routine completely changes.”

Song Seung Heon’s new drama “Player” premieres on September 29 at 10:20 p.m. KST and will be available on Viki! Check out the latest trailer with English subtitles below: