Soyou and SHINee’s Key are well-known to be close friends and their friendship shined in the latest episode of tvN’s “Amazing Saturday.”

K.Will and Soyou made guest appearances on the episode of “Amazing Saturday” that aired on November 24. During the show, the cast talked about the strong friendship between Soyou and Key.

She explained, “We even live pretty close to each other so we meet up often. We like to chat, go searching for good restaurants, and drink together.” Key added, “And Soyou featured on my first solo single. Working together helped us become even closer as friends.” Soyou had everyone laughing when she teasingly interjected with, “We’re talking about me right now. Why are you suddenly trying to promote your solo album?” 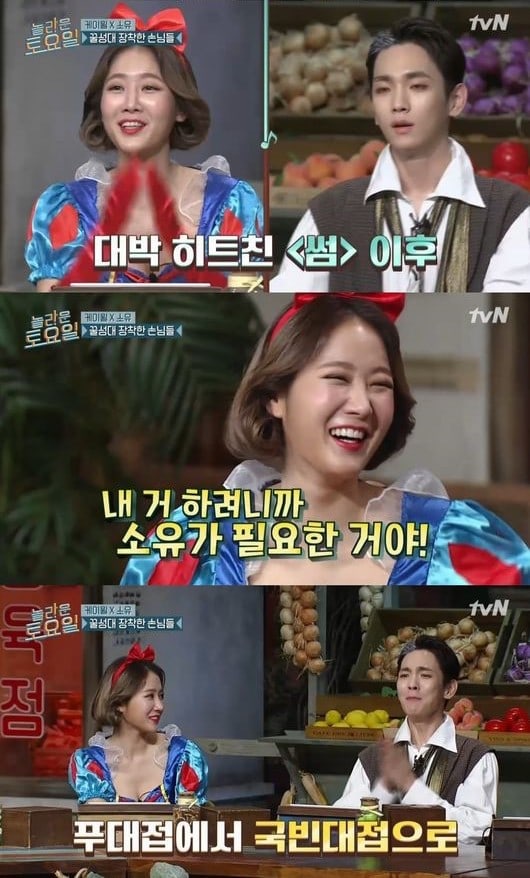 When asked if it was true that Soyou had played hard to get when Key was asking her to feature on his album, Key said he had been a little disappointed because of it. Soyou had her own grievances to air out as she said, “Key only started asking me to work with him after ‘Some’ did well.”

Key explained, “In the past, I used to tease Soyou about her voice, saying her voice was 90 percent air and 10 percent sound. But when I was making my album, I realized that her voice was what I needed to complete it.” It was then that he begged her to feature on his album, and she agreed.

Both singers were laughing throughout the story, showing how strong their friendship is as they joked around and had fun.