Yubin and Stray Kids showed their support for the contestants of Mnet’s “Super Intern.”

On the February 7 episode, the interns continued to compete and develop ideas for JYP Entertainment’s artists.

Wi Jung Eun’s team became in charge of consulting Stray Kids, and Kang Ha Yoon had previously revealed that she’s a fan of the group. Expressing concern, she said, “I really like them, but I was also worried at the same time about what to do.” Using her experience as a fan, she played an active role in the team by sharing the messages she believed Stray Kids was trying to convey.

Choi Ji Eun pitched an idea that centered around the question, “How about you?” and suggested enhancing the bond between Stray Kids and their fans. The team began designing Stray Kids’ emblem and asked fans to take a survey. Won Dong In, who had previously created a game for TWICE, began to program an app for Stray Kids when some fans voiced their desire for one.

Stray Kids sat in the judges’ seats and talked amongst themselves about their evaluation criteria. Hyunjin replied, “I’m going to see if they created a good program for Stray Kids to grow in the future,” and Han said, “I hope they have something to them that will draw my interest and make me listen to what they have to say.” Changbin added, “I think there will be good consulting advice if they know our team and members well. I’m going to focus on how well they understand us.”

Wi Jung Eun, Choi Ji Eun, Kang Ha Yoon, and Won Dong In then entered the room, and the boy group greeted them. After listening to their presentation, Lee Know asked about the difference between the app they were proposing versus their current fan community platform Fan’s. The interns explained that the results of the survey showed that many fans were having difficulty using Fan’s on their mobile devices and asked for an app. Seungmin then asked if they would be the first group to have this kind of app, and the interns replied that they would be.

Lee Know followed up with a question about their outfit concepts for 2019. Instead of being startled by the unexpected question, Kang Ha Yoon used her background as a Stray Kids fan to answer him. She brought up a photo of Bang Chan untying a ribbon with his teeth at a fan meeting and proposed the idea of incorporating strings into their outfits that would emphasize their lines and sexiness. 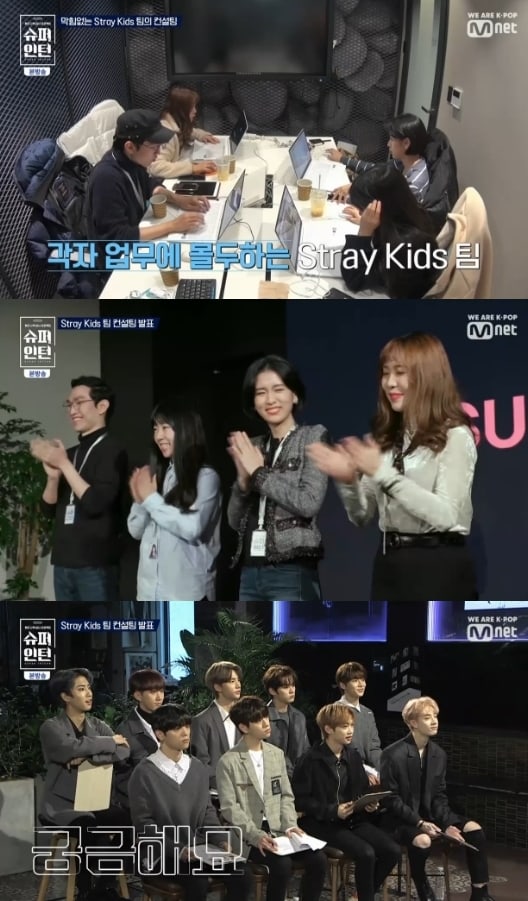 Despite lacking research about Stray Kids’ weaknesses, the interns’ presentation moved the boy group. In the end, this group of interns won first place in the consulting assignment. Park Jin Young commented, “I didn’t even imagine a survey. I give you a perfect score for research material.” As a result, Nam Sang Hyun, Kim Hye Ri, and Kim Tae Joon returned their employee IDs.

Park Jin Young then announced the second task that required the interns to plan his schedule for a whole 24 hours and said that he would be looking at their planning and execution abilities. After receiving their new assignment, the 10 interns took a brief coffee break at the company café when Yubin walked in. They were surprised to see her, and she came by to say hello before asking them if she could sit down for a quick chat.

The interns revealed that their next mission was to plan Park Jin Young’s 24-hour schedule, and Yubin gasped before adding, “I can’t do it.” When an intern asked about things they needed to keep in mind when planning his schedule, Yubin replied, “He has quite an open mind so he’s accepting of everything. But he’s someone who values time even down to the 0.1 second. I think that’ll be important.”

She continued, “To give you a tip, he really likes things that are the first or the best. If he does something original that no one has ever done before, then he’ll really like it.”

The interns then began to open up about the difficulty of understanding the desire and perspective of the artists, and Yubin comforted them by saying that it was completely understandable since it’s their first time doing this line of work. Cheering them on, Yubin said, “Don’t think about it too hard. Good luck on the assignments and I hope I can see you at our agency,” and gave everyone high fives. 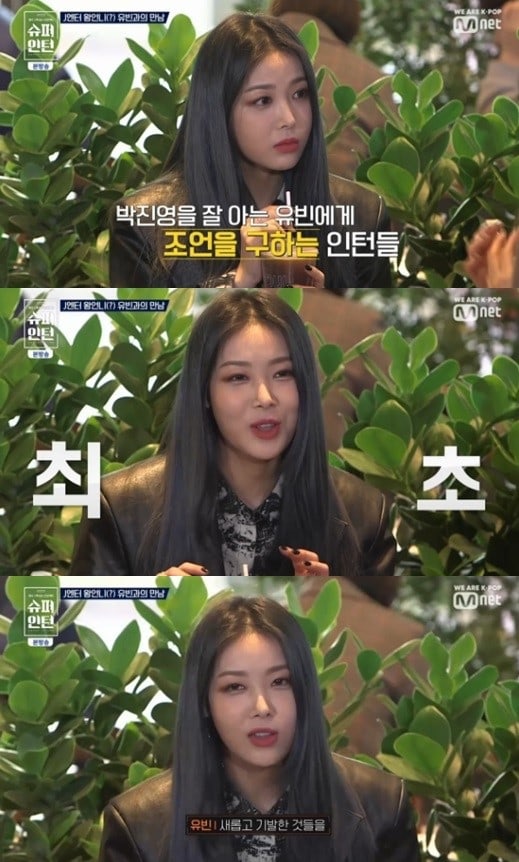