Stray Kids began their career as a nine-member group, but now Felix is asking STAY to believe in OT8.

In October 2019, soloist Kim Woojin withdrew from Stray Kids due to undisclosed personal reasons that have recently come under scrutiny. He has been accused of sexual assault, drugging and impregnating a fansite, and creating a false company.

Kim Woojin and his agency, 10x Entertainment, denied the initial sexual assault accusations and provided photographic evidence, but they have not yet responded to netizens’ latest claims.

10x Entertainment would like to announce our plans to take legal actions against the malicious false rumors about our artist, Kim Woojin. Ahead our legal processes, we wish to reveal photo evidence to make sure the fans don’t have any misunderstandings.

When Woojin left Stray Kids, fans were sad to see him go. Now, many say they are glad Woojin withdrew from the group when he did, as it saved the remaining eight members from becoming “tarnished” by his scandal.

woojin is doing nothing but exposing himself. he's a manipulative asshole and i'm glad he left the group bc he would've tarnished their name. i can't even begin to imagine how chn and the other members must've felt. https://t.co/IDrPTWQWet

I was touched when I saw these 8 men struggling to keep STAY's feelings and asked us not to leave them.

Kim Woojin I was disappointed in you…
We are happy with SKZ now and Woojin has nothing to do with them anymore pic.twitter.com/MpW88I2jo6

Now, Felix is asking STAY to believe in Stray Kids’ eight members in a new Instagram post. The group is currently preparing to release the repackage of their first studio album titled In Live on September 14.

Some fans feel that this post could be a response to Woojin’s scandal: a reminder to that Woojin is no longer associated with Stray Kids, and that OT8 hopes fans will STAY by their side.

FELIX'S CAPTION ON HIS NEW IG POST IS "STAY BELIEVE IN STRAY KIDS 8" I'M CRYING SO MUCH THEY KNOW WHAT'S HAPPENING ???????? pic.twitter.com/oyqrDzvlQN 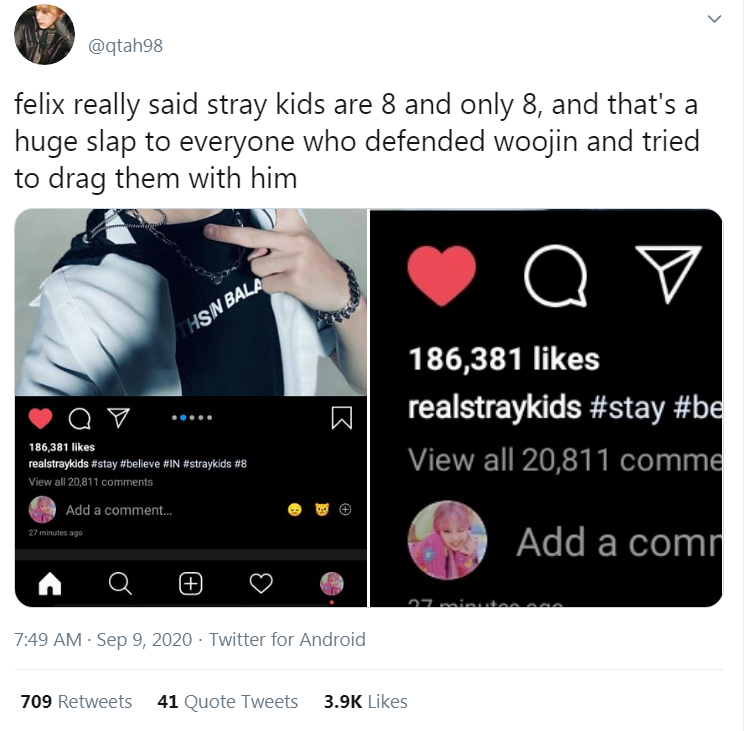