In an interview with Xportsnews, Hyunjin, Seungmin, and I.N, some of the younger members of Stray Kids, talked about school, what they want to do whey they become adults, and more.

First, the three members talked about the other older members of Stray Kids. Hyunjin said, “In Stray Kids, there is a mom and a dad. The mom is Bangchan, and the dad is Woojin. There are those two, and there are troublemaker hyungs, too. Changbin and Lee Know are chaos!”

Asked if they were popular in school, I.N just said he went to an all male middle school, and that the school he is attending now has a lot of other celebrities. Laughing, Hyunjin said, “There are a lot of stars more famous than we are. We have no presence…” 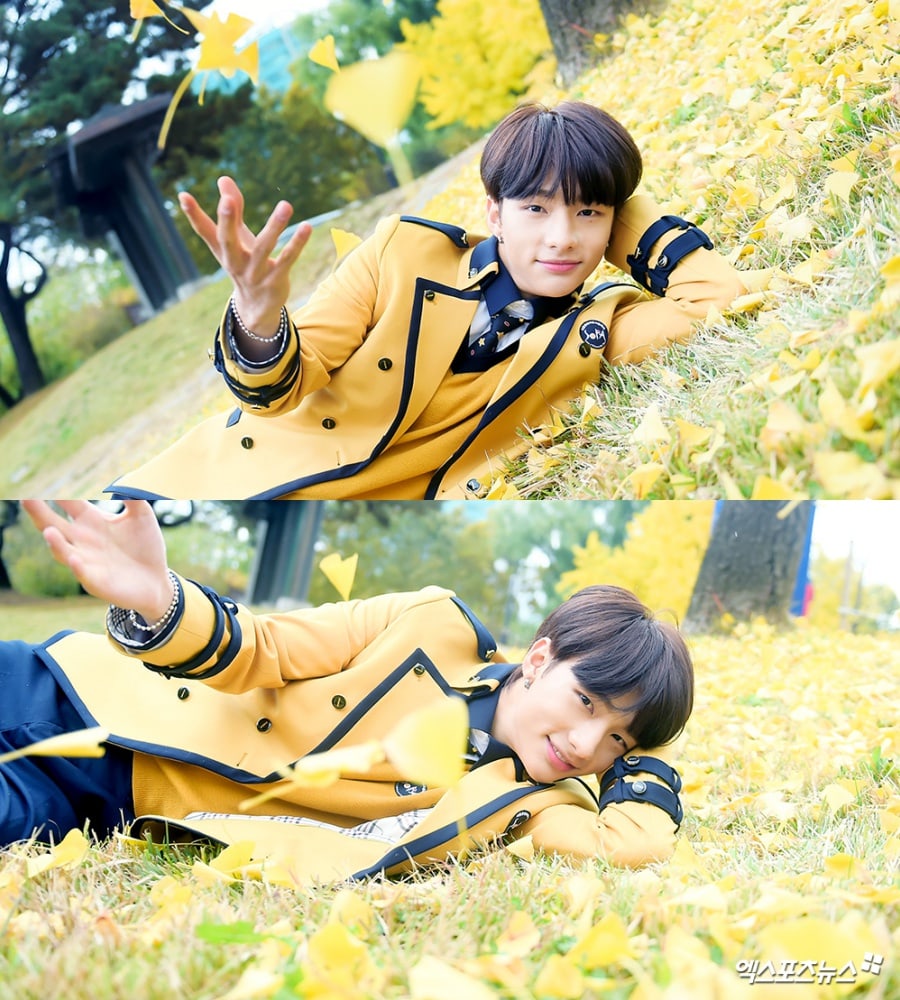 Hyunjin then talked about his high school nickname, “The Prince.” He said, “I really have to explain. The kids in my class say to me, ‘Why are you a prince?’ They’ve never called me that! The students in my school don’t call me that, and I don’t think of myself as my high school prince, either.” Pleading with the interviewer, Hyunjin said, “Please write about this!”

Seungmin said that after debut, he no longer plays with his friends outside. “[Before debuting], I used to go out to eat and go around with my friends. Now that I’ve debuted, I just stay in the classroom after eating, and I only hang out with my friends inside the classroom.” He explained, “I don’t get the chance to talk to my friends in class. So I ask them what they’ve been up to and what kids do these days when they hang out.” Seungmin learns new slang from his friends, and said he sadly found out that the slang he knew turned out to be old. 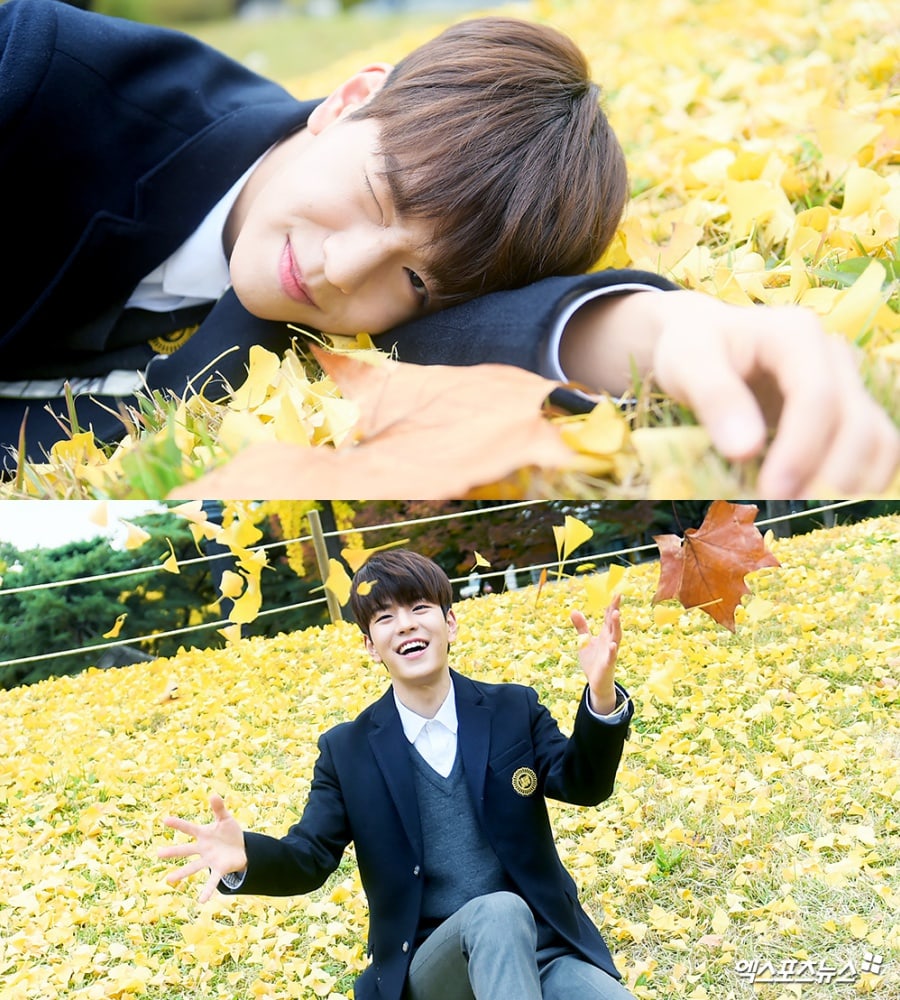 I.N said, “I’ve never [received any sort of proposal]… When I was in middle school, someone from another school sent me a letter once!” Hyunjin and Seungmin agreed, saying that usually, nothing in particular happens. Seungmin said, “I got a letter once from a younger student. It happened exactly once, so I remember.”

When asked about their favorite class in school, Hyunjin and I.N both shouted, “gym class!” Hyunjin added, “Actually, I liked art more (to which I.N also agreed). When guys are in a group, they’re never drawing, but as others were [playing], I got hooked on art.” The interviewer then asked if the other members of Stray Kids are good at art, and I.N chimed in, saying, “For the other members, it’s like they’re drawing with their feet.”

Seungmin, on the other hand, enjoyed learning Chinese characters the most, which threw everyone for a loop. He explained, “Our teacher had a lot of fun stories. He would talk about life, marriage, that kind of thing. If class was 50 minutes, 35 of them would be TMI (too much information).” 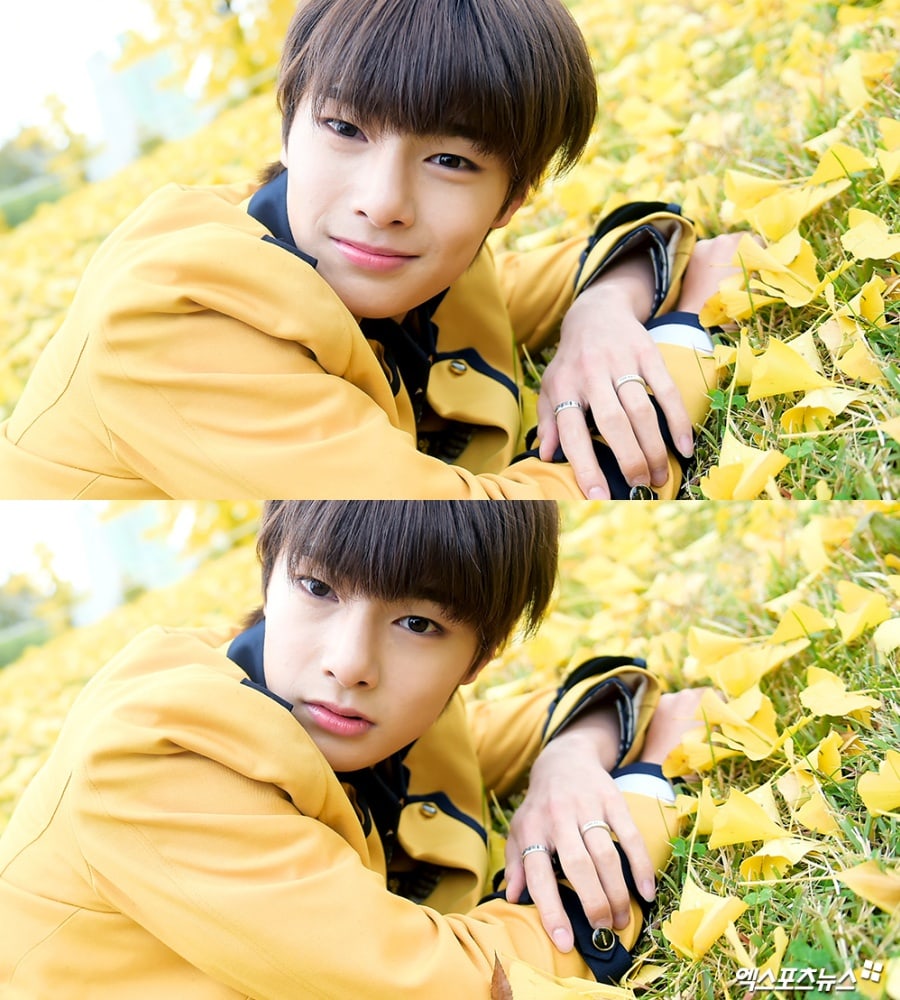 The members also emptied their bags, revealing what they carry on a daily basis, as well as things that they just had for the day: 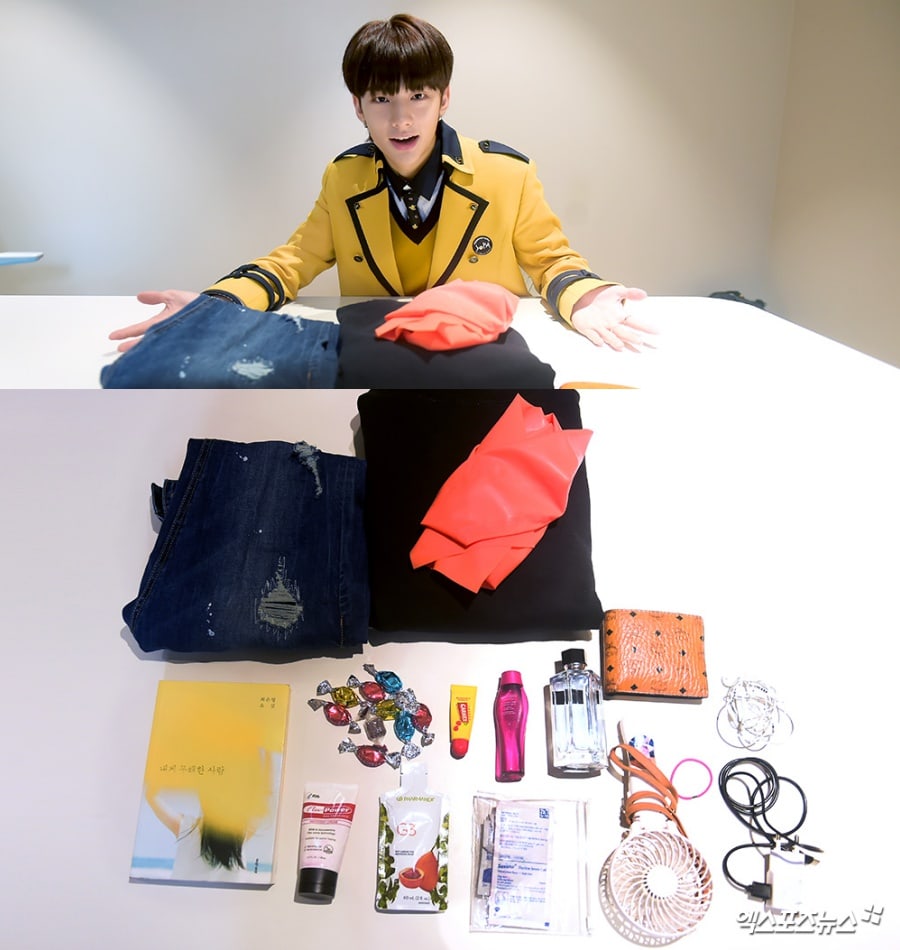 Most notable in Hyunjin’s bag are a change of clothes, which he said he brought because he needed to go practice right after the interview. For practice days, he also carries a stretching band for relieving sore muscles. 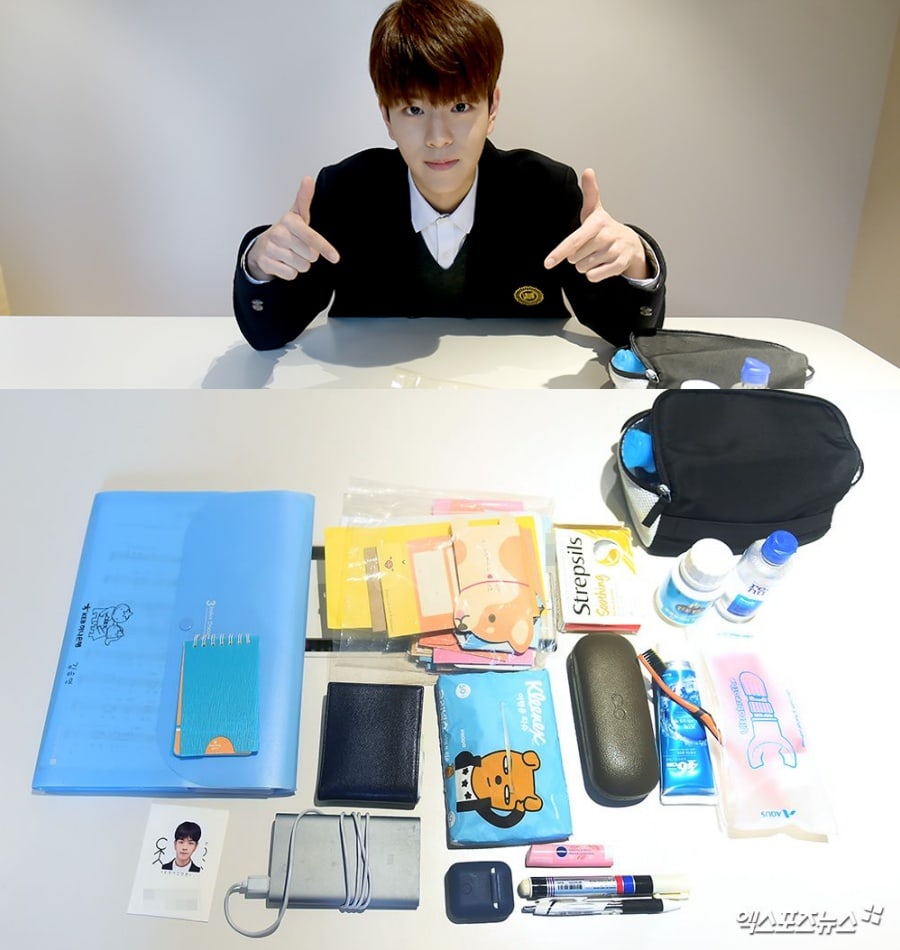 Immediately catching the eye among Seungmin’s possessions is a stack of letters from fans. He said, “I didn’t get to read the ones I got yesterday, so I put them in my bag to take back home.”

He has an id photo, which he revealed is for his passport, recently lost. “I normally don’t lose things.” Seungmin also carries his cleansing items around with him in a pouch. He said, “Once our schedule is over, I like to [take makeup off] immediately.” 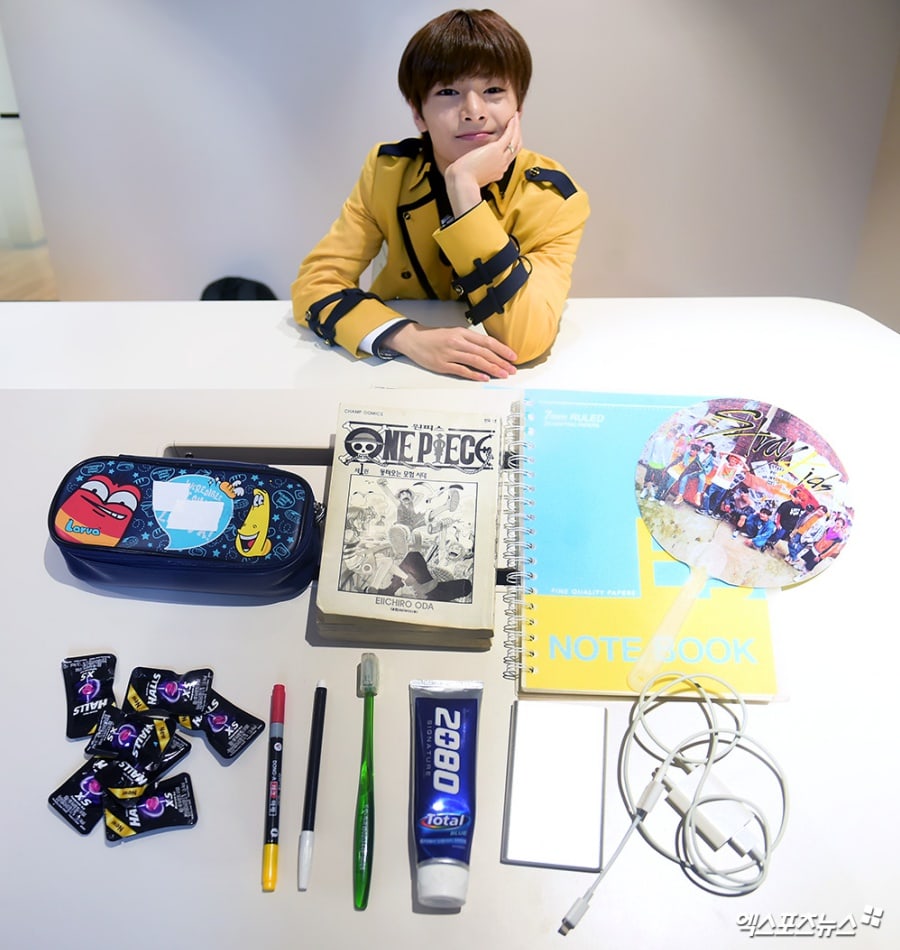 I.N is currently carrying the first two volumes of “One Piece.” He said, “I started it today, because I wanted a hobby.” The cute cartoon pencil case, he said, was his younger brother’s. He started using it after his brother, who is in elementary school, got a new one. 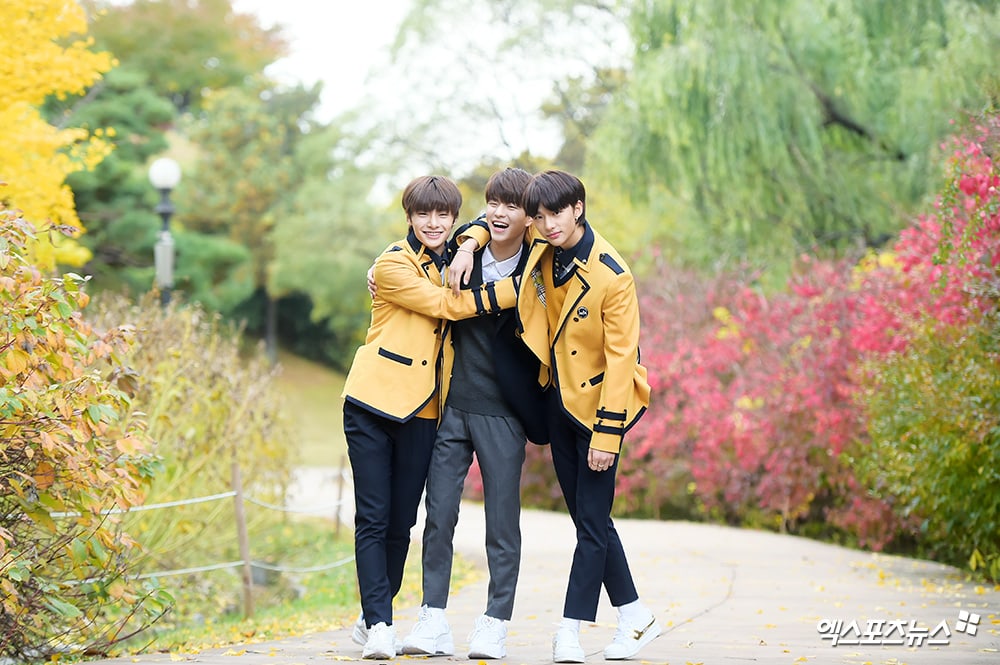