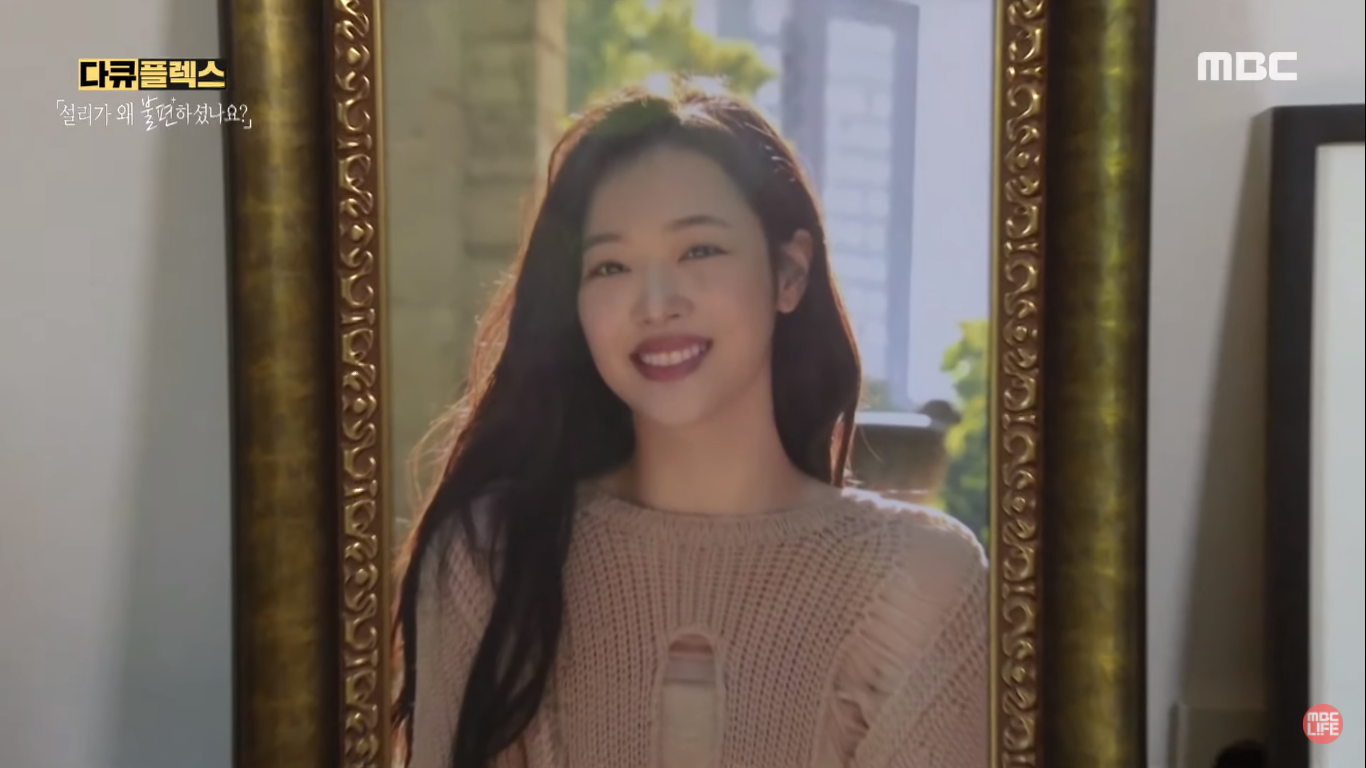 The episode was titled “Why did you find Sulli so problematic?” which is fitting for a celebrity who was at the center of countless controversies.

Sulli’s mother, who has stayed away from the public limelight, appeared on camera for the first time. She shared everything from Sulli’s early years, to her eventual departure to the heavens.

When Sulli was just seven years-old, her mom got a divorce and had to work to financially support them. She chose to send Sulli to a Hagwon instead of a kindergarten. The principal at the acting Hagwon in Busan was ecstatic about Sulli and she began to think that Sulli had a chance of making it big in Seoul, so they made the move.

They ran out of funds after six months, but Sulli cried and said she wanted to learn more. After a month of hardship, she was cast for the drama Ballad of Seodong. Director Lee Byung Hoon said that Sulli not only had the requisite acting skills, but also the it-factor. She was confident, shone under bright lights, and had the face of a princess.

During her involvement in Ballad of Seodong, a press reporter suggested the stage name Sulli. The two took a liking to it and adopted the name.

SM Entertainment contacted them after her exposure on Ballad of Seodong, and promised to develop her into the next face of the agency. From a very young age, Sulli began living her dormitory life.

Sulli used to talk about her unnies obsessing over their weight, but she too eventually became that way. In 6th grade she suddenly grew to 172cm, and struggled to maintain low weight.

Although she initially signed a child actress contract with SM, Sulli’s growth spurt made her unsuitable for most roles for children. At SM’s insistence that idols were their forte, Sulli’s career directions shifted towards debuting as part of a girl group.

Things were going great until news broke of her relationship with Choiza, who is 13 years her senior. Her mom found out through the press reports, and initially thought it to be a misreport. After calling Sulli and receiving confirmation, she thought it was completely inappropriate and voiced her disapproval.

Sulli started to distance herself from her mother, and stopped keeping her informed regularly. They began to quarrel constantly. When Sulli voiced her desire to receive pay directly from SM and provide her mom with stipends, the relationship became irreparable.

In 2016, SM contacted Sulli’s mom and said that Sulli had cut her wrist, was transported to the emergency hospital and was receiving treatment. Her mom was warned about the incoming press articles, but was assured that things were under control.

She insisted on visiting the hospital to see her daughter, but the upcoming reports were planning to cite Sulli as having slipped in the bathroom. The visit would have ruined the alibi, so her mom I cried every day at home for a week. Her self-harm incident happened shortly after her publicized breakup with Choiza.

Sulli apparently had many bags of medication in her house. Her mom laments that “she must have been so lonely…and it pains me to have found out when it was too late.

When Sulli’s mom received news of the suicide, she was adamant that Sulli would not be leaving her house by herself for her very last time. She was determined to hold hands and escort Sulli out herself, so she headed over there.

Sulli was all by herself in her room on the 2nd floor. Her mom made contact with her hands, face, and rested Sulli’s head on her lap for a good hour. She stressed numerous times about regretting not having touched her all the way down to the tip of her feet, as she still feels there wasn’t proper closure.

I should’ve apologized for being late in attending to her. I desperately want to make up for lost time, if only I could do it over again.

Watch the heartbreaking trailer for the documentary here: