Sunmi sat down for an interview on the SBS Power FM radio show “Park So Hyun’s Love Game” on September 11 to talk about her recent comeback!

Sunmi’s new track “Siren” is currently topping many of Korea’s major realtime charts, after recently becoming her first song to score a perfect all-kill. Sunmi wrote the lyrics for the song and also co-composed it.

When host Park So Hyun asked her how she feels about being in first on the charts with a song she wrote herself, Sunmi said, “I was seriously so surprised. I wondered if it was a dream, and felt dazed.”

She added that while she was happy with the album she’d worked so hard on and wanted to not care about the chart rankings, she felt a bit uncertain because it was a self-written song and her previous works had done well. “I just hoped that it would be in the top 20,” she said with a laugh. “So I was really surprised.” She also looked into the camera and directly thanked all her fans.

Park So Hyun also mentioned that many people have done covers of Sunmi’s previous songs such as “Gashina,” and asked her who she hopes will cover “Siren.”

“Wanna One’s Lee Dae Hwi has said that he’s a big fan of mine,” replied Sunmi. “Whenever I released a song, he did a cover dance.” She explained that she thinks Lee Dae Hwi would suit the choreography in the chorus, where she does a gesture inspired by the movements of a mermaid. 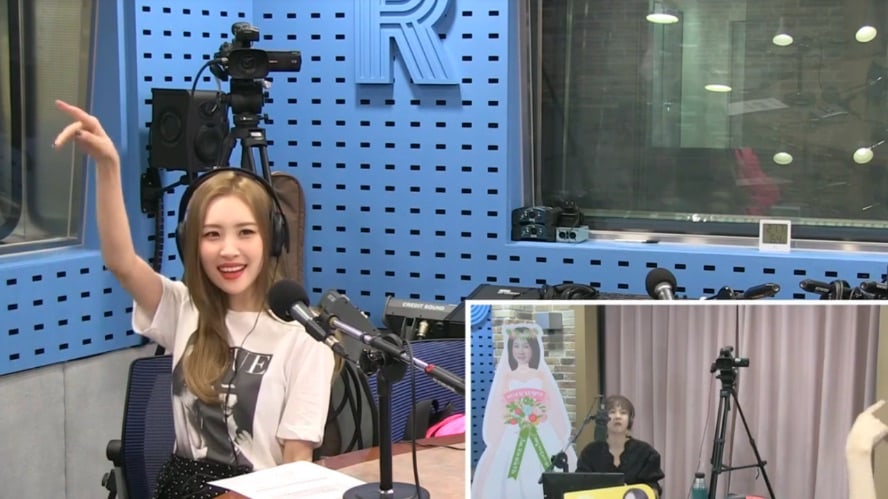 “His lines are so beautiful when he dances,” she said. Park So Hyun then made Sunmi laugh by asking her to send a video message to Lee Dae Hwi.

Sunmi said, “Hello Dae Hwi, it’s Sunmi. I made a comeback with ‘Siren.’ I forget where it was, maybe Taiwan, but you promised me that you’d upload a post on Wanna One’s fan cafe when I made a comeback.” She laughed and said, “You haven’t done that. So I hope that instead you’ll do a beautiful mermaid dance!”